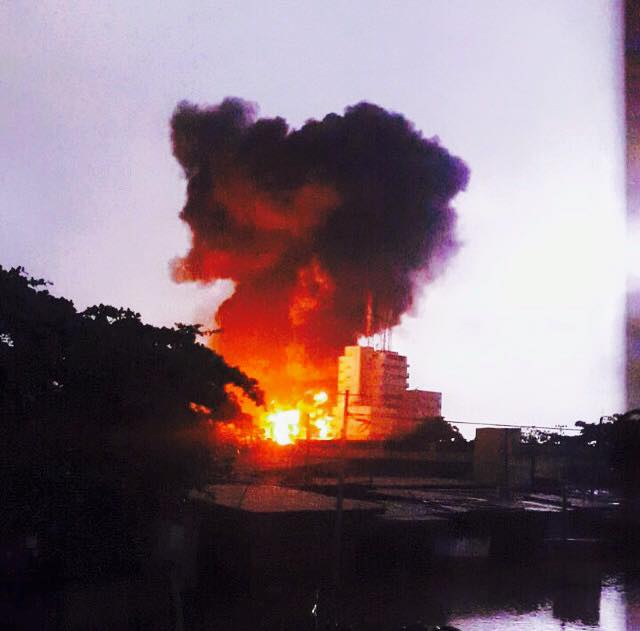 Some 8 people have been pronounced dead, while several others are injured in last night’s Goil Filling Station raze at the Nkrumah Circle in Accra.

The number could go up by early morning.

The filling Station, close to the main Nkrumah Circle branch of the Ghana Commercial Bank was completely razed down by fire in an havoc that lasted several hours.

A joint team of security personnel from the Fire Service, NADMO, and military, tried for hours to access the location but to no avail as the road leading to the location was flooded.

The fire, which started some few minutes past 10pm Wednesday evening, spread to nearby structures.

While most parts of the capital including the Nkrumah Circle has been declared a “no go area’, several residential and office buildings have been left wrecked.

A Producer for Kasapa FM‘s morning show, Kojo Preko Dankwa, tells us he was stuck at one place for close to two and a half hours.

Government has called for calm. A statement signed by Minister of Communications, Edward Omane Boamah reads:

“As a result of the rains in and around Accra over the past two days, many suburbs of Accra and surrounding parts have been heavily affected leading to heavy restriction of movement of people.

The traffic situation has worsened on some roads, and fast flowing rainwater is also impeding vehicular movement on some others.

The Achimota sub-station has been affected by the floodwater, leading to an emergency cut in power supply to a number of communities, which were otherwise not programmed to go off tonight.

Residents are informed that personnel of the Ghana Armed Forces, the Ghana Police Service, the Ghana National Fire Service and the National Disaster Management Organisation have been deployed to intervene and provide emergency services to affected persons.

The general public is kindly advised to avoid fast moving rainwater, and areas they know have big drains. Stay on higher ground, where necessary, to prevent loss of life.

Please remain calm, restrict your movement as much as possible as we work assiduously to address this national emergency.”