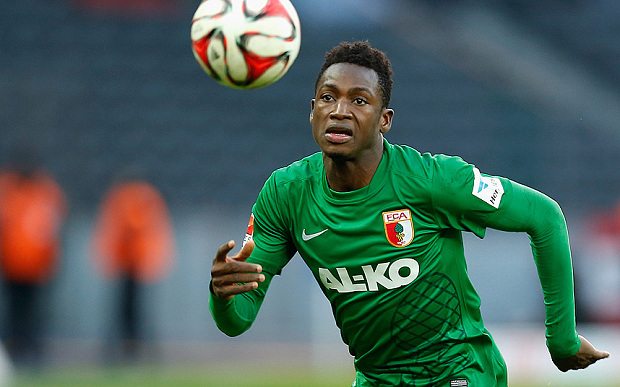 The Blues are looking at the Ghana international as a potential replacement for Filipe Luis, who is keen to leave the champions and is wanted by former club Atletico Madrid and Inter Milan.

Augsberg are prepared to cash in on their prize asset, who was regarded as the best left back in the Bundesliga this term.

They have set a minimum asking price of £14.2m for his signature and a number of clubs are weighing up a bid.

It is understood both Arsenal and Manchester City have declared an interest, while Italian champions Juventus and a number of the leading Bundesliga clubs are also keen.

There were reports that Chelsea had stolen a march on their competitors with Rahman’s agent flying into London today to conduct talks following a £10.6m bid.

However, Standard Sport understands that is not the case and no firm offer has been lodged with Augsberg by any club as yet.

It is believed the 20-year-old, who is currently on holiday in Ghana, is keen to leave Augsberg to join a side playing in the Champions League.

Playing regularly is also key, which could put a move to Chelsea in doubt given Cesar Azpilicueta has excelled as first choice for the past 18 months.

Both Rahman, who will return to pre-season training at the start of next month, and Augsberg want his future sorted out sooner rather than later.