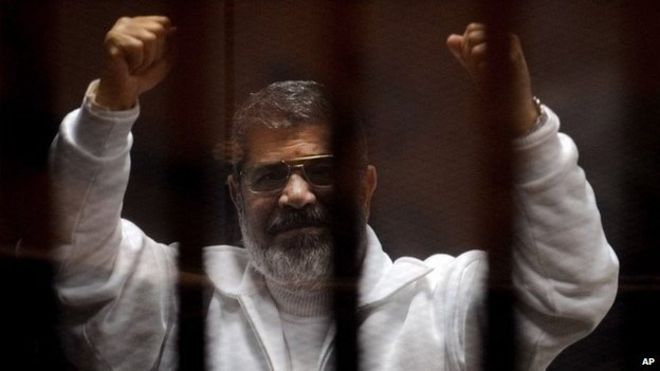 An Egyptian court has upheld the death sentence imposed on ousted ex-President Mohammed Morsi over a mass jailbreak.

The sentence was initially passed in May, but was confirmed after consultation with Egypt’s highest religious figure, the Grand Mufti.

The death sentences of five other leading members of the Muslim Brotherhood, including its supreme guide Mohammed Badie, were also upheld.

Morsi’s supporters have described the sentence as “farcical”.
The verdict is subject to appeal. One hundred and one other defendants were also sentenced to death in absentia.

Morsi escaped from Wadi Natroun prison in January 2011 and was accused of colluding with foreign militants in a plot to free Islamists during mass prison breaks.

The 2011 uprising brought an end to Hosni Mubarak’s 30-year rule and Morsi was elected president a year later.
Espionage

He was deposed by the army in July 2013 following mass street protests against his rule and is already serving a 20-year jail term for ordering the arrest and torture of demonstrators.