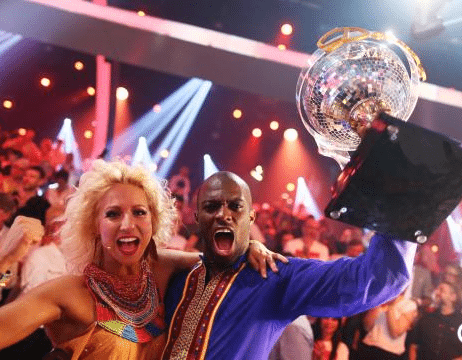 What a thrilling finale! After nine tense dances, critical jury judgments and long minutes of trembling stands at 00.07 clock the winners of “Let’s Dance” 2015 have been declared: Hans Sarpei secures together with professional dancer Kathrin Menzinger the title “Dancing Star” and thereby gains the eighth season of Dance Show.

Go there with the jury dance. Hans Sarpei and professional dancer Kathrin Menzinger show a Samba All Night Long (All Night) “by Lionel Richie.

The jury was full of praise and sees a clear improvement to the first performance of the dance.

“I’m very excited about it, what are you with your Body chemistry because – in a positive sense. You have a lot of rhythm in the body, the hip moves, “says Joachim Llambi.

It continued with the popular dance. Here, Hans Sarpei and Kathrin Menzinger danced to a Hip Hop tune and they chose ‘Black Or White’ by Michael Jackson. It proved an absolutely correct decision, as evidenced by only a few moments on the dance floor.

Again, the jury were fully honoured the outstanding performance with 29 points. ‘Let’s Dance’ Juror, Jorge Gonzalez in his assessment of the dance by Hans Sarpei with enthusiasm said..: “This is Hip Hop, which is rhythm, that’s cool, that’s very good, Hans.”

In the final freestyle to a specially selected music and a special choreograph, Hans Sarpei and professional dancer Kathrin Menzinger again dazzled to an Africa-Medley. The jury were almost speechless with such a professional performance and can be used for this service only 29 awarded points.

“You’ve danced with rhythm, with emotions. Since everything was there, what I want in a freestyle “says Motsi Mabuse.

In sum, that is, after a thrilling final: Hans Sarpei is “Dancing Star” in 2015 after the jury vote and audience voting he has with professional dancer Kathrin Menzinger all behind left.

“I have to thank Kathrin, we’ve had a lovely time and I have a new friend. I thank you that I got you as a professional dancer, “said the emotional words of the happy winner.