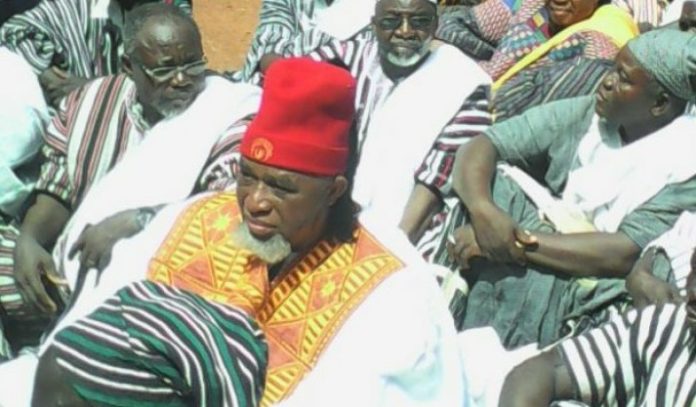 Enskined Paramount Chief of Tongo, Robert Nachinab Doameng Mosore, has said he took the decision to honourably resign from his Talensi parliamentary seat because he didn’t want people to malign him.

He said he felt very uncomfortable when he became the subject of discussion at a plenary sitting in Parliament recently when the honourable member for Asawasi, Mohammed Muntaka-Mubarak brought up the issue.

“The paramount skin is a very noble one and I don’t want to have my paramountcy to be disturbed and some people rudely make certain comments on that. I have come to Parliament and have served diligently. I have now moved on to serve my people as a chief or a king nobly. I don’t want anybody to because of a by-election to make all sorts of claims and noises… that will not make it nice for me”, he said in an interview with Fiifi Banson on Anopa Kasapa on Kasapa 102.3 FM Wednesday.

In April, 2015, Mr. Mosore, who was representing the people of Talensi on the ticket of the New Patriotic Party (NPP) ascended the throne of the Tongo Paramountcy, under the name Tongo-Raana Kolbilsong Namalteng following the death of then Tongo-Raana, Sapaalug-Namalteng Boara Yenga Kolbil.

However, he came under severe criticism, especially, from the Majority side of the House for not officially informing the legislature over his enskinment.

On Tuesday, May 19, 2015, the Majority Chief Whip, Alhaji Mohammed-Mubarak Muntaka, drew the First Deputy Speaker of Parliament, Ebo Barton-Odro’s attention to the issue, arguing that the NPP MP should have resigned his seat before contesting the paramountcy.

Hon. Barton-Odro who was then presiding over the sitting gave a sixteen-day ultimatum to the MP to either be heard or seen in the House, failure of which the House would have no option than to refer him to the Privileges Committee for questioning.

But Mr. Monsore said Muntaka’s comments came to him as a surprise, noting that the Majority Chief Whip knew that there existed a procedure to follow when an MP is enskined a chief.

“I was not comfortable with the way he went about making it as if I want to be in Parliament and continue to be a chief. No no no … we have to follow procedure and the procedure is there … I made a choice and it was not by anybody’s influence that I have to be a King or Chief.”

“That was very unfair. I even served on the mines and energy committee with him. Politics as we have here is not just to look at it like this way, this world is a very long journey and I can tell you that it is just not what you do today that matters. You have to do things and think about the future.”

He added “as I speak, I have been enskined a chief but not gazetted in the register of the National House of Chiefs. So, those who are saying that you are a chief and for that matter you should resign, it is not so. It is the other way round. If you are already a chief, and you are gazetted and listed, you can’t go into national politics without resigning because that one is clear. But if you are a Member of Parliament who has been made a chief and you are not yet listed into the House of Chiefs register, it is better for you to wait even though once you are appropriately enskined … it is only when you are registered that you can call yourself a chief and act accordingly.”

Mr. Mosore on Tuesday, June 9, 2015, announced through the Speaker of Parliament, Edward Doe Adjaho, his resignation from occupying the Talensi seat after his enskinment to bring the controversy surrounding him to an end.

But he told Mr. Banson that the decision was taken under duress because the criticism was unbearable.

SoNA: We have no hung parliament in Ghana – Majority Leader