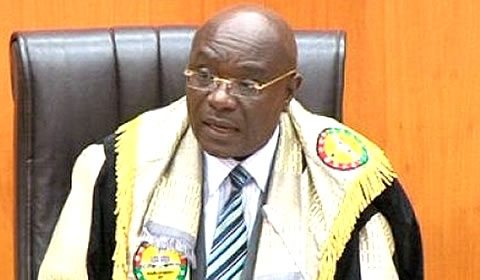 The Speaker of Parliament, Rt. Edward Doe Adjaho, will tomorrow rule on the Talensi seat which has become the subject of an ongoing controversy in the House.

The Speaker would either declare the seat vacant or call on the House to wait until he receives an official letter from the occupant, Robert Nachinab Doameng Mosore, announcing his resignation.

His decision for the latter would be subject to he (Speaker) hearing from Mr. Monsore, who has been enskined as the Paramount Chief of Tongo.

Rt. Hon. Edward Doe Adjaho, who passed on the information to members during a plenary sitting last Friday, said the House could not wait for Mr. Mosore to decide on his own as to when to vacate the seat now that he has been enskined as a chief.

“It is not for him to determine when he should resign. I have given him some time to hear from him. However, as I speak now, I have not heard from him. Therefore, I have decided that if I don’t hear from him, then on Tuesday, I will rule on the matter.”

In April, 2015, Mr. Mosore who is representing the people of Talensi on the ticket of the New Patriotic Party (NPP) ascended the throne of the Tongo Paramountcy following the death of the Tongo-Raana, Sapaalug-Namalteng Boara Yenga Kolbil.

But he has come under severe criticism, especially from the Majority side of the House for not officially informing the legislature over his enskinment.

On Tuesday, May 19, 2015, the Majority Chief Whip, Alhaji Mohammed-Mubarak Muntaka, drew the First Deputy Speaker of Parliament, Ebo Barton-Odro’s attention to the issue arguing that the NPP MP should have resigned his seat before contesting the paramountcy.

Hon. Barton-Odro who was then presiding over the sitting gave a sixteen-day ultimatum to the MP to either be heard or seen in the House, failure of which the House would have no option than to refer him to the Privileges Committee.

Order 17 of the Standing Orders of Parliament states that “A Member who desires to resign his seat in the House shall notify Mr. Speaker in writing under his hand of his intention to resign seat and Mr. Speaker shall inform the House as soon as practicable”.

Order 18 of the Standing Orders further states that “The seat of a Member shall be declared vacant by Mr. Speaker under clause (1) (b) to (h) of Article 97 of the Constitution”.

Commenting further, the Speaker said due to the exigency of time, it was proper for the House to decide on the matter in order not to contravene the laws of the land.

He told members that on May 26, 2015, he received a letter from Mr. Monsore dated May 12, 2015, informing him (Speaker) that he was still undergoing the process leading to the final rites and recognition as the enskined Paramount Chief of Talensi following which he would inform him (Speaker) of his resignation “in the next few weeks” when the process is concluded.

According to the Speaker, since then, he has not heard from the Talensi MP again whom he said cannot determine when he should resign.

But the Minority Leader, Osei Kyei-Mensah-Bonsu, responding to the issue prayed the Speaker to suspend the ruling for one week to enable his side go for their Party primaries, which is scheduled for this Saturday.

The Majority Leader, Alban Sumana Bagbin, commenting on the matter argued that “the Speaker is at the mercy of law and therefore, there is nothing that he could do”.