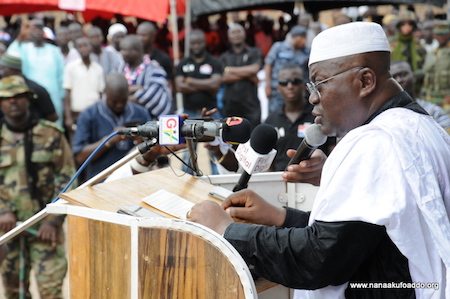 It is with a sad and heavy heart that I make this short speech at the funeral rites of Adams Mahama, as a tribute to our fallen colleague and as a petition to the Al-mighty Allah. May Allah accept our brother Adams into Jannah (paradise). Adams was a believer in the true sense in which Islam defines a believer, for, as the Qur’an states:  “believers are those who, when Allah is mentioned, feel tremor in their hearts…who establish regular prayers and spend freely out of the gifts that We have given them for the sustenance of others…they have grades of dignity with their lord and forgiveness and generous sustenance” (Q: 8:2-4). Ever since the death of our brother, there have been uncountable testimonies about his generosity and how he went out of his way to care for the poor, the needy, the infirm and the old and destitute.
His good deeds on earth would surely grant him a place among the elect of God in Jannah. The Prophet Muhammad (Peace be unto him) is reported to have said that ‘the one who looks after a widow or a poor person is like a mujahid who fights for Allah’s cause or like him who performs prayers all night and fasts all the day’ (Bukhari, Vol VII, p.202). We should therefore think of the admonition of Allah and accept that Adams is now resting at a better and hallowed place. It is about men like Adams that it is written: “Allah has prepared for them gardens under which rivers flow, to dwell therein; that is the supreme felicity” (Q: 9:89).

I know that many of us continue to have great difficulty coping with the raw pain and anger generated by the tragedy. Many of us cannot come to terms with the fact that the life of such a virile, dynamic and charismatic young man has been cut short. I understand this anger and I share the pain; but I urge self-restraint and I plead with you that, in all we do, we treat the memory of Adams with dignity and reverence.

Let us wait patiently for the police to do their work. So far, it appears they are doing a good job, and we expect them to continue to do so and not to be influenced in any way by political pressure of any sort. We take on board the reassurance given us by the Minister for the Interior that the President of the Republic continues to insist that justice will be done to Adams. But, I will state again what I said on May 29, 2015: we shall not be satisfied with anything less than the arrest and successful prosecution of the killers of Chairman Adams. There should be no ifs and buts.
I make a heartfelt appeal to all of us to recognize and accept that violence cannot and should not be the manner of resolving political disputes in our country. What is more, my friends, the concept of an eye for an eye in dealing with wrongs, will leave all of us blind. Let us be consoled by the fact that Adams has found peace with Allah and let his legacy be one of peace in our community, in our party and in our country.

Adams was passionate about Ghana. He was convinced that the NPP will capture power in 2016 in order to improve the lives of the people of Ghana. It is up to us to make sure that Adams did not die in vain.

The way in which we will not let his death be in vain is to rededicate ourselves to the struggle ahead, that is the struggle to redeem our country and return her to the path of progress and prosperity. When we have done this and put the smiles back on the faces of all the poor and needy people that Adams took care of, only then would we have truly “avenged” his death.

To his widow, children and family, I pray that Allah Himself be your consoler. Allah will not take Adams from you and not give you another comforter in his place. Allah assures you, saying, “I have nothing to give but paradise as a reward to my believing slave, who, if I cause his relation to die, remains patient and hopes for Allah’s reward.” (Bukhari). In addition to the amount of GH¢43,000 that has been donated by the party to the family and widow, and the GH¢90,000 that the Regional Chairmen have setup as a foundation for them, it is my responsibility to ensure that the party fund, as already promised, is established to take care of the education of the children and the maintenance of the widow. The initial capital is GH¢100,000. Additional contributions from sympathisers and well-wishers are, of course, welcome.

I cannot conclude this brief speech at the Adua on the occasion of Adams Mahama’s infamous death, without also referring to and praying for the victims of the horrendous tragedy that occurred in our capital city of Accra on the Ring Road Central last Wednesday. That day was, indeed, a dark day in our nation’s history. We beg the Almighty to give the souls of the dead a peaceful rest, and a speedy recovery to the injured.

Again, as at the burial, we want, Mr. Interior Minister, to express to you and through you to the NDC Government and the President of the Republic our sincere appreciation for your acts of continuing solidarity with us in our hour of sorrow. We extend the same appreciation to the other political parties who have come here to mourn with us. Ghanaian democracy is strengthened thereby.

Let us all remain patient and pray for Allah’s reward.

May the soul of Adams Mahama and the souls of all the faithful departed rest in the bosom of the Lord until the last day of the Resurrection when we shall meet again. Amen.