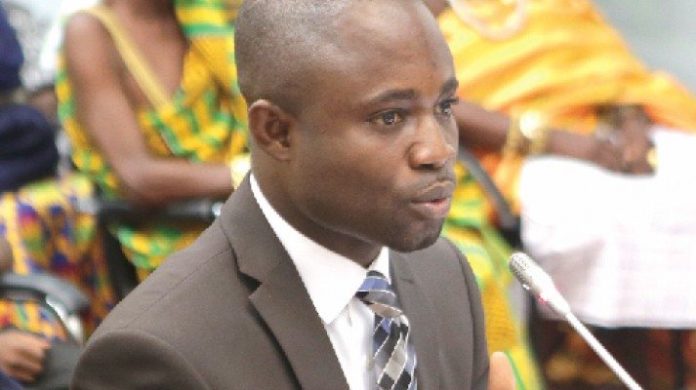 Deputy Minister for Lands and Natural Resources and MP for Juaboso, Kwabena Mintah Akandoh, Tuesday, shunned government business in Parliament to attend to an interview on an Accra-based radio station.

A question in his name had been advertised on the Order Paper for the 29th sitting of the Second Meeting of the legislature to ask the Minister for Roads and Highways, Alhaji Inusah Fuseini when the Proso-Anhwiafutu Junction road will be constructed.

But when the Speaker of Parliament, Rt. Hon. Edward Doe Adjaho, offered him the floor to ask the question, he was nowhere to be found.

His leaders also had no clue of his whereabouts.

Shortly after, the MP for Adaklu, Kwame Governs Agbodza rose up and told the Speaker that he had been authorized by the absentee deputy Minister to ask the question on his behalf.

Speaker of Parliament, Rt. Hon. Edward Doe Adjaho, who looked not convinced about the development, said “Well, you don’t look like somebody who has been authorized to ask the question. Your face and demeanor doesn’t look like that but I will allow you to do so.”

The Minority Leader, Osei Kyei-Mensah-Bonsu, who was equally not convinced with the reaction of Mr. Agbodza, inquired about the where about of Mr. Akandoh.

“Mr. Speaker, my colleague is very fine but I don’t know specifically where he is currently,” Mr. Agbodza answered.
But the Speaker retorted “how did he authorize you and when?”

In a swift answer, Mr. Agbodza said “over the weekend.”

But his permission was objected to by the Deputy Minority Whip and MP for Sunyani West, Ignatius Baffour Awuah who pleaded with the Speaker to step down the question which stood in the name of Mr. Akandoh.

“Mr. Speaker, when I was coming, I was listening to radio, Adom FM. I overheard him speaking on Adom FM,” he said.

The Speaker at this juncture became alarmed and noted that “that is very useful information.”

The trend of the discussion then provoked the Deputy Majority Leader, Alfred Agbesi, who directed the business of House of the day, to jump to the defense of Mr. Akandoh, by seeking the indulgence of the Speaker to allow the MP for Adaklu, Mr. Agbodza to ask the question on his behalf.

The Minority Leader, Osei Kyei-Mensah-Bonsu, objected to the reaction from the Majority front and reacted furiously.

“Mr. Speaker, the issue is about the importance the Hon. Member attaches to the business in this House. He is a deputy Minister. Between going on Adom FM and doing serious business in this House, he cherishes that more than the transaction in this House. Mr. Speaker that is the obvious inference and that is why I asked my colleague where the man is as we speak. I know for a fact that this question was asked before he was made a Minister … If we give you that authority before he became a minister or after he became a minister and you are not even able to tell where he is except to tell us that he is fine, physically he is good…”

Deputy Majority Whip, Ibrahim Ahmed, seemed not convinced with argument advanced by the Minority Leader and again pleaded with the Speaker to indulge the MP for Adaklu to ask the question on behalf of Mr. Akando.

He argued that the comments passed by the deputy Minority Whip did not imply that the deputy Land and Natural Resources Minister was physically present at Adom FM.

But the Minority Leader retorted “Mr. Speaker, the obvious inference from the intervention of my colleague, the deputy whip, is if the member is physically present at Adom, it will be incongruous to allow anybody to ask the question for him here. That is the obvious inference. Mr. Speaker, I want to put it on record that the person is sitting at Adom FM in which case we go on the second leg of your submission that if indeed he is physically present it will be most incongruous for him. In that case, I think that the question should be stepped down.”

A second attempt by Mr. Agbesi to defend the absentee MP was however quashed by the Speaker.

“Hon. Deputy Majority Leader, you know that there is a principle that we all have to agree on that when you have a business to transact in this august House, you must attach an importance to it. Why do I say so? Are we not the ones who complain in this House when ministers don’t come to respond to questions? So, why should if an MP has a business and he doesn’t come and transact it … why should we be defending that MP? Why should we? Principle is well the indivisible,” he ruled to the admiration of Members.

The Speaker nonetheless allowed the question to be asked on behalf of the deputy minister but cautioned that was the last time he would do such a thing to pass.