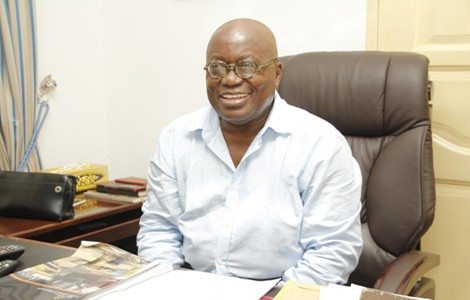 Justice Appau has completed his work as “THE JUDGMENT DEBT COMMISSION” and been elevated, controversially, to the Supreme Court.

However, the reverberations of his report are beginning to be felt. In the last week, Journalist-cum-lawyer Samson Ayenini and Accountant-cum-lawyer Prof. Kwaku Asare have clashed on the leaked findings. Mr. Ayenini speculated that Nana Akufo-Addo, based on the findings, could be barred from contesting the Presidency while Prof. Asare firmly debunked that contention. The basis of the disagreement rests, in part on this section of the report: “This Commission holds the view that the payment of US$ 19.5 million instead of the US$14 million earlier agreed constitutes financial loss to the corporation and Ghana.”  In debunking the possibility that Nana may be barred from the Presidential election, Prof. Asare writes “In fact, nothing in this finding, even accepted at face value, will disqualify Akufo-Addo or anyone from elective office”. Then he launches into an esoteric explanation of why this finding would not be disqualifying. That explanation would leave many, except for legal luminaries like him, completely lost in arcane details of law and constitutional twists.

In fact, the two luminaries both got it wrong in focusing on the legal and constitutional ramifications of Justice Appau’s report. Nana Akufo- Addo stands no risk at all of being excluded from the 2016 Presidential election, except for an act of God. While such a finding by a Commission could be disqualifying, Justice Appau himself has nullified the strength of the finding by his willful and inexplicable disregard for due process and the rule of law. He failed to summon Nana Akufo-Addo for his side of the story! Surely, the eminent jurist would have known that making such a finding without affording  Nana Akufo-Addo a chance to present his version of events would make that particular finding null, void and of no effect?

The damage from the report, to Nana Akufo-Addo, is not legal at all. It is political and it is gargantuan.

That report, in the hands of the NDC propaganda apparatus, would blow a very wide hole in Nana Ado’s pretensions to incorruptibility. Every villager and street urchin in Ghana would hear of how Nana Addo willfully colluded with others to make Ghana pay 19.5 million USD instead of 14 million USD and thus caused “FINANCIAL LOSS TO THE STATE”. They will then add the NPP’s government’s inability to account for the difference between the money realized from the sale of the drillship and what was paid in the lawsuit. And they will blame Nana Akufo-Addo, fairly or unfairly, for all of these.

If the NDC succeeds in doing this, they will effectively take corruption off the table for the 2016 election.

To pre-empt this, Nana Addo must tell his side of this sordid saga, immediately, repeatedly and in varied forums, in clear and simple language. This battle must be won, not in the law courts or through legalisms, but in the court of public opinion. Relying on the legal luminaries to present complicated and esoteric arguments will not work. This will require Nana to present his case, in person, guided by the commonsense of practical men and women, rather than the brilliance of legal luminaries. At this time, Nana and the NPP must be wary of those whose mantra is “Let’s go to court”. We have gone to court enough. Let’s take this case to the people. Let’s stay on the right side of the corruption issue because it is the side of the angles and the people.