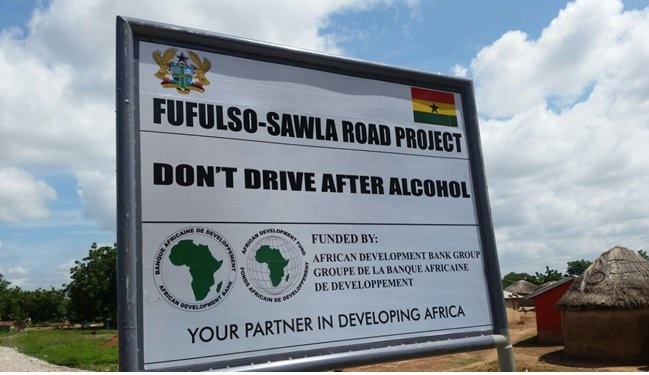 Government has made good one of its major campaign promises by constructing the Damongo-Fufulso-Sawla road.

Previous governments failed in their attempt to construct the road which featured in all past national budget statement for over two decades.

Work on the asphalted 149 kilometer stretch road estimated at 166 million US Dollars which was funded by the African Development Bank, began on January 2, 2012.

The people of Gonjaland almost gave up on the construction of the road which links the Northern Region to the Upper West Region and other parts of the country.

There are seventeen communities who are beneficiaries of other ancillary facilities such as markets, clinics, classroom blocks, teachers bungalows, public latrines and hand dug wells.

However, after President John Mahama’s inauguration of the road on Thursday, one thing that has caught the attention of some commuters is the inscription on the sign board erected by the road side.

The sign board which has the Coat of Arms and Ghana Flag on both sides has the inscription “DON’T DRIVE AFTER ALCOHOL” boldly written.

Though the import of the caution statement can be surmised, many are of the view that it could have been well communicated by the authorities who erected the board.