The facility forms part of a five-year investment plan worth GH₵100million by Conserveria Africana Ghana Limited, the company behind the importation of tomato paste brands such GINO and POMO.

The magnificent state-of-the-art facility has a generating capacity of 30,000 metric tons per annum.

President Mahama, commenting on the facility said the company is one of the landmarks in fulfilling his state of the nation address delivered last year where he mentioned over reliance on imports of goods from abroad as the major problem confronting the Ghanaian economy.

“I believe that this factory is going to boost the attainment of our agenda for transforming the Ghanaian economy into an export led economy. It will also reduce the amount of foreign exchange that we spend each year on items that we have comparative advantage to produce in Ghana,” he noted.

According to him, since last year, there has been some remarkable progress in cutting down the rate of goods imported into the country.

For instance, he said local rice production has seen an increase by almost 60% whereas investment in poultry production and aquaculture have also gone up. 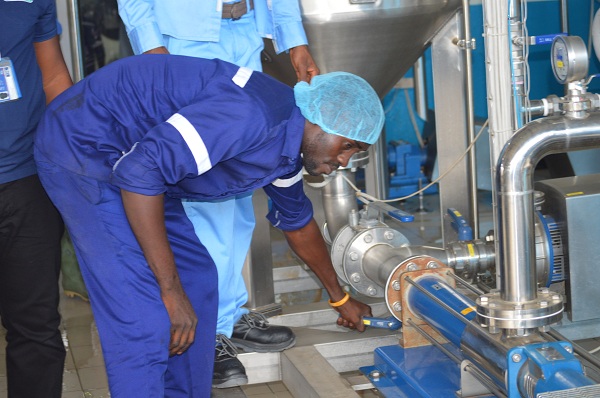 According to the President, the model adopted by Conserveria Africana Ghana Limited, to set up a packaging plant in Ghana will go a long way to reduce the importation of tomato paste where the country stands to save US$100million per annum.

He also lauded the backward integration plans by the Indian owned company where they are expected to produce their raw materials locally by 2017.

He assured the company of the government’s support in all their endeavours but appealed to them to liaise with the Minister of Trade and Industry “to see if there is a window of opportunity to partner the government and see how best to revive the Pwalugu Tomato processing factory.”

He believes when that is done, it will further create employment for the teeming unemployed youth.

The Managing Director of the company, Rajib Chattopadhyay, said following the execution of the first phase of their investment plan, they have no option than to go ahead and further invest the balance outlay of GH₵50million by 2017 after receiving positive responses from a cross section of the general public.

According to him, with the factory now on stream, GINO and POMO, their leading brands in over 24 countries in West and Central Africa, would be produced locally.

“We started with a dream to migrate from finished goods imports to a sustainable model of locally manufactured tomato paste right here in Ghana. We started our journey to fulfill this vision in 2012 with a budget outlay of over GH₵100million over five years. Since then, we hav already invested around GH₵50million in building local capacities to the tune of almost 30,000 metric tons per annum. GINO and POMO are now being produced at our factory,” he said.

He added “Given the strong presence and footprints of GINO and POMO in West and Central African region, we hope to increase exports to these markets once we satisfy the local market.”

The MD further revealed that the company also has a vision to extend its current efforts to develop a sustainable raw material base originating in Ghana through backward integration.

This, he noted, will enable Ghana to not only meet its annual demand in excess of 70,000 metric tons of tomato paste, save more than US$100million in foreign exchange but also give its farmers a sustainable means of livelihood and increase the employment opportunities across a broad range of primary and support industries in the region.

“Given that Africa as a continent imports in excess of 500,000 metric tons of tomato paste each year from countries such as China and the United States of America, we also see an opportunity to develop Africa-Africa trade using Ghana as an export base.”

Diamond Appiah seeks ‘favour’ from Mahama after mocking him

Akufo-Addo’s one constituency-$1million is a joke – Okudzeto Ablakwa