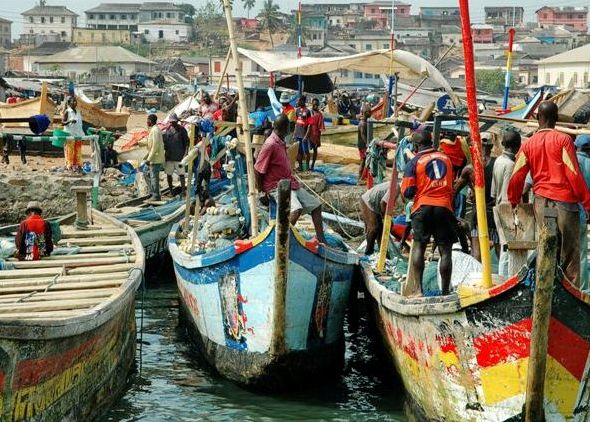 The government has been unable to stop foreign trawlers from pillaging or local fishermen from using unsustainable methods to increase their catch, despite EU pressure

Ghana’s poor protection of its fishing resources is hurting small-scale fishermen and is causing disputes with the country’s major trade partners.

While the government has stepped up its efforts since the European Union (EU) awarded a ‘yellow card’ warning for its failure to fight illegal fishing in 2013, it has not been able to stop practices that pollute the environment and decimate fish populations.

The problem is not limited to Ghana, and the Gulf of Guinea is renowned for widespread flouting of fishing laws.
According to the Africa Progress Panel think tank, around $1.3bn is lost each year in West Africa to illegal fishing.

Some 50km east of Accra is Prampram, a fishing community where most of the men have at some stage in their lives been engaged in fishing.

Jacob Tetteh Ayin has been fishing for 22 years and has seen how the practice has changed: “Since 2000, the fishing business has been like anybody does what he or she wants to do.”

Many small-scale fishermen have seen their trade devastated by the arrival of industrial vessels. Nii Kai Okaishie III has been Jamestown’s chief fisherman for two years. There are more than 600 fishermen in the community, which is one of the oldest areas of Accra. “These big, big trawlers are supposed to fish deep, but sometimes they come down and come and fish where these people [canoe fishermen] fish,” he tells The Africa Report.

When this happens, trawlers can destroy canoes and rip nets apart. The cost of canoes starts at 30,000 cedi ($9,100), with the net and motor costing another 10,000 cedi. When small-scale fishermen return to their boats after a trawler has passed, they can find their livelihoods ruined and are unable to trace the culprits.

Competition is leading to a race to the bottom. Chief fisherman Okaishie says: “They [canoe fishermen] are trying to compete with the big trawlers. Take the cost of the premix fuel for example. You might buy 30 gallons, and one gallon is 7.10 cedi. Fishermen can be going to sea a week without a catch. Sometimes they borrow the money before buying the fuel.”

Caught under mountains of debt and needing to fish ever greater quantities to keep up, many engage in illegal fishing. “They put a generator bulb into the sea from their small boat and lower it,” explains Okaishie. “When they spark the generator, all the fish around that area will come to where the light is. They leave one person to lift the light slowly and the fish follow.”

James Agbla, who has been fishing for 32 years in Prampram, says: “With the lighting system, fish that would normally be in the sea for three months will be caught in two days.” Others use carbide or the pesticide DDT to daze the fish and make them easier to catch.

Alberto Martin of the Environmental Justice Foundation explains that these practices undermine fish stocks by hitting juvenile populations. Targeting those young fish is creating a crisis. “In response, the government is developing a monitor, control and surveillance system to combat illegal fishing, but it is critical that this approach has an adequate investment of financial and human resources,” Martin argues.

The knock-on effects of unsustainable fishing practices are damaging livelihoods across Ghana. Hundreds of coastal communities depend on the fishing trade as their main source of income.

Fish is a key contributor to food security, as two-thirds of Ghana’s consumers eat fish as the only source of animal protein. A continued decline in fish stocks and growing consumption mean that Ghana depends on imports to meet 40% of its national demand.

A weak legal framework to enforce fisheries legislation and limited capacity to monitor and patrol have undermined Ghana’s fisheries sector. The combination of strong demand and a loose regulatory framework has attracted foreign industrial vessels that can make considerable profits from the fishing black market.

Government efforts have centred on intelligence and surveillance of illegal activities. The government established the fisheries enforcement unit within the fisheries ministry in response to the 2013 EU warning.

The unit’s staff are drawn from the navy, marine police, the fisheries ministry and the Bureau of National Investigation. They total 55 people seconded from their respective institutions. Despite their limited number, the unit is supposed to patrol a coastline of more than 500km and cover a maritime area of 228,000km2.

James Azamesu, a public relations officer at the fisheries ministry, argues that the government has made considerable progress since 2013: “I would say that we are over 80% there. A big step was the establishment of the fisheries enforcement unit, and ensuring collaboration across the major security agencies was an important development.”

People on the ground see things differently. In Prampram, fisherman Tetteh complains about the difficulty in dealing with fishermen who illegally use lights to attract fish. He got involved in a brawl with a group and took them to the police station, but the offenders were never charged. Instead, Tetteh and his crew were held. Agbla, a fellow fisherman, complains: “Law no dey [there is no law].”

Kyei Kwadwo Yamoah, a programme manager for the non-governmental organisation Friends of the Nation, points to corruption as a force that weakens regulations.

“[There is] political interference with enforcement. Some politicians have vessels themselves. Some fishermen are funding political parties,” he adds.

Yamoah reports that the number of small sardines, a local staple, are dropping. Fishing communities like Prampram report regular declines in their catch, and the government admits it does not have the capacity to produce thorough statistics on the legal and illegal fish trade.

Local communities also complain that the government is biased against them and unwilling to hold the operators of foreign trawlers to account. A naval officer based in Takoradi, the capital of the Western Region, verified claims that foreign trawlers simply buy their way out of prosecution.

The officer, who requested anonymity, says: “There is a lot of frustration after carrying out the hard work to bring foreign vessels to dock and arresting the crew, that the majority of these ships are back out to sea after paying undisclosed out-of-court settlements. The high fines are hardly ever ordered by the courts.”

The fisheries ministry strongly denies the claims but acknowledges that the judiciary is a weak link. Without matching effective law enforcement with a stronger and better-funded regulator, Ghana risks killing the fish that lays the golden roe.

My govt does not shy away from public scrutiny – Akufo-Addo