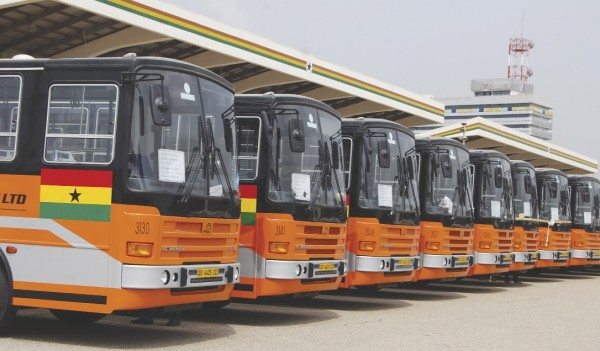 An investigative report into the procurement activities of the Metro Mass Transit (MMT) Limited has revealed that GH¢7.5 million released for the purchase of tyres, batteries and spare parts was not approved by the board or the tender committee of the company.

That amount, according to the report, infringed on the procurement threshold in respect of those purchases.

However, a document which showed a board/tender committee approval for procurement amounting to about GH¢2.1 million was sighted by the investigative committee.

The report has established that Big Alhassan Mart, an auctioneer of MMT buses, did not follow due disposal and evacuation processes for the sale of the buses.

Employees of the MMT, in December 2014, alleged that a syndicate in the company had stolen 12 buses owned by the company and that development compelled the workers to embark on a strike calling for the dismissal of the then Deputy Managing Director (DMD), Mr John Awuku Dzuazah, and the Board Chairman, Osabarima Ansah Sasraku III.

Following the strike, the MMT board commissioned a five-member internal committee to investigate the allegations but the committee did not find any missing buses but rather established some procedural lapses regarding the disposal of the scrapped buses.

Subsequent to that, the Ministry of Transport engaged the services of PricewaterhouseCoopers Ghana Limited (PWC) to validate those findings.

The report, signed by Mr Felix Addo, a partner at PWC, said the Kumasi Depot Manager of the MMT, Mr Stephen Abukari, alleged that he received instructions by phone from the former DMD to allow two buses to be towed out in whole.

But the former DMD, in an interview, denied the allegation of issuing such an instruction.

According to the report, the management of the MMT failed to communicate a clear policy on how scrapped buses were to be cut to ensure that they became unusable and identified lack of technical supervision in the cutting of scrapped buses sold.

The investigative team assessed the roles played by the various parties involved in the procurement matter and the alleged missing buses to establish whether there was sufficient evidence to establish wrongdoing and culpability by the individuals involved.

The report pointed to potential breaches on the part of the board chairman when the Tender Committee rejected recommendations by the evaluation panel in respect of tyres and selected Allied Home Stores Limited (AHSL) as the preferred bidder.

It said the AHSL was not shortlisted by the evaluation panel, since the company did not meet the set criteria.

The report also fingered the former Managing Director of the MMT, Mr Noble John Appiah, for erring in going beyond his approval threshold, as that was against the company’s authority approval schedule.

It also accused him of supervising ineffective systems, as he took matters into his own hands in periods when there was no board and tender committee.

“He also signed a flawed contract with Fuel Solutions Limited for the management of fuel intake for MMT’s fleet of buses and a fleet tracking system. He only called for a renegotiation of the contract after the equipment had been installed and he realised that the terms of payment and the exchange rate were not favourable,” it said.

Mr Appiah, it stated, leased one acre of land in Tema from Good Shepherd Technical Commercial School without approval from the board and paid GH¢331,200.

But Mr Appiah, in his reaction, told the Daily Graphic that he acted in good faith and was not involved in any wrongdoing.

The report took issue with the former DMD for going beyond his approval threshold, as it was against the company’s policy.

When contacted, Mr Dzuazah, who has been reassigned to the State Transport Company Limited as DMD, said his decisions were to save the company from collapse, for the fact he had acted in the absence of the managing director.

The report observed that the profitability of the MMT from 2011 to 2014 had not been impressive as a result of a combination of external factors, such as competition and internal factors, including revenue leakages, high operating cost and control lapses.

It was of the view that given the mass appeal of the company and its geographical coverage, it had the ability to be self-sustaining if it was restructured, “root and branch”, to drive profitability.