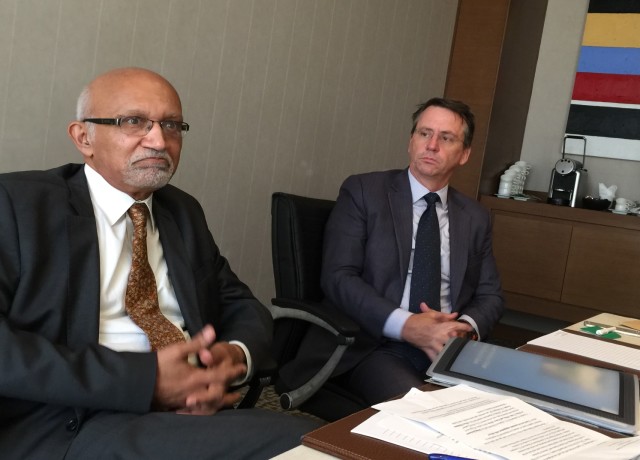 The United States Government would in September this year lead the largest ever business trade mission to Ghana and seven other sub-Saharan African countries to look for investment opportunities.

Apart from Ghana, the US investors will also visit countries such as Nigeria, Angola, South Africa, Mozambique, Tanzania, Ethiopia, and Kenya.

“We want to see how best US companies can bring their solutions to make a difference in Africa,” Arun M. Kumar, Assistant Secretary of Commerce for Global Markets of the United States of America has stated when he met journalists in Accra before departing to Gabon for the 2015 AGOA Summit last week.

He said although Ghana had various challenges in the area of infrastructure, energy, healthcare and fiscal challenges, the US was committed to promoting US-Ghana trade and investment.

“The trade missions that would visit Ghana would be interested in areas such as infrastructure, energy, and healthcare,” Mr. Kumar hinted.

For the past ten years, close to $ 14.5 billion dollars has been invested into the Ghanaian economy by 40 percent of members of the American Chamber of Commerce in Accra, from 2004 to 2014.

He continued: “One could see the direct correlation here between this U.S. investment and the growth of U.S.- Ghana trade in the same period as well as the positive footprint American companies have in Ghana when it comes to hiring and training the local labour force.”

Mr. Kumar assured Ghana of the United States’ commitment to promoting U.S.-Ghana trade and investment emphasizing the need for continuous progress in decision making in areas of Ghana’s infrastructural projects. This, he said, held the potential for boosting trade and improving the lives of the ordinary Ghanaian.

He congratulated the Ministry of Trade and investment for its efforts in developing and signing the Trade Africa framework, which is designed to increase internal and regional trade within Africa, as well as expand trade and economic ties with the United States.

Mr Kumar encouraged Ghanaian entrepreneurs looking to enter the U.S. market or partner with U.S. companies to get in touch with the team of Commercial Specialists at the U.S. embassy for the needed assistance.

He called for more education and awareness creation on the benefits of the African Growth and Opportunity Act (AGOA) to African businesses, lamenting that, Africa was not taking enough advantage of the AGOA, which was meant to give the continent the opportunity to export to the US market.