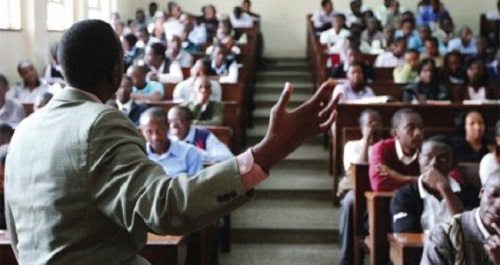 The University Teachers Association of Ghana, (UTAG) says it will continue with its strike action until its demands are met by the government.

The teachers have boycotted the lecture halls claiming that government is yet to acknowledge the many letters they have written on their 2014/2015 Book & Research Allowance hence the sudden decision to strike.

Government has however asked UTAG to call off the strike as it has initiated the process to pay the allowance for the 2015 financial year.

But speaking to Kasapa News Friday, the National President of UTAG Samuel Ofori Bekoe stated that the group is not ready to back down since it served notice of its intention several months before embarking on the industrial action.

“We gave the government ample notice, we made publications in the Daily Graphic Newspaper and wrote several letters, it is the case that they never took our issues seriously and decided not to act on it. The fault is not ours, the government called for it. Where do they expect us to find money to pay for journal articles with which we teach, if they will not give us the money but will buy the materials for us fair enough.”

Return to the classroom or lose your salaries – NLC to Teachers