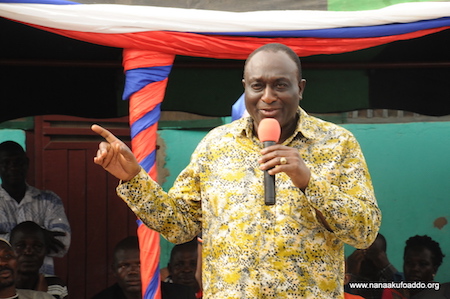 Former presidential aspirant and former Minister of Trade, Industry and Presidential Special Initiatives, Alan Kwadwo Kyerematen, has assured the people of the Brong Ahafo region of a revival of the oil palm industry, which has collapsed under the John Mahama led-National Democratic Congress government.

Addressing a meeting of Moslem clerics and chiefs of settler communities in Derma, in the Tano South constituency, whilst accompanying Nana Akufo-Addo on a visit to the constituency, Alan Kyerematen noted that the NPP, under President John Agyekum Kufuor, had a vision of making oil palm a cash crop, and a major foreign exchange earner for the country.

To this end, 11,000 acres of oil palm were cultivated in four communities in the Tano South constituency – Derma, Ankaase, Ada and Sesekpo.

“This was an unprecedented feat by the NPP. If this government, as usual, had not played politics with it and continued with this initiative, all of you here, as oil palm farmers, would have been rich by now,” he said.

Again, with the people of Derma also engaged in the cultivation of tomatoes, Alan Kyerematen explained that, under the NPP government, the Pwalugu tomato factory was rehabilitated and equipped with modern, state-of-the-art equipment for the processing of tomatoes.

“This factory, located in the North, has collapsed under John Mahama. His government did not pay attention to this factory, which has the capacity of processing 25 truckloads of tomatoes every day. If the NPP had continued in office, the processing of tomatoes alone would have also made tomato farmers rich,” he added.

He, therefore, assured the gathering that the oil palm industry and the Pwalugu tomato factory will be all revived under the next NPP government, led by Nana Akufo-Addo.

“When the NPP came into office from 2001, we brought so many job opportunities for which the populations of Derma and Tano South were major beneficiaries. We will do it again under Nana Akufo-Addo,” he said, drawing a rousing round of applause from the packed Assemblies of God Church Hall in Derma.

He continued, “It is because of the change he wants to bring to the people of Ghana that is why he is contesting for the Presidency of this country. When he comes into office, he will revive all these businesses so that prosperity for all is achieved.”

Measure of performance not in projects

According to the NPP leading figure, every government, from independence till now, has projects to it name, and, therefore, the only measure of performance of any government should be the conditions of living of its people.

“Have you come across any government which has not built a school or hospital before? The management of the economy, however, is what is important, because it will bring relief to all. When Nana Akufo-Addo comes into office, the good works of President Kufuor will be replicated and even surpassed,” he added.

Nana Akufo-Addo’s message for the 2016 election, according to Alan Kyerematen, is that “he is coming into office, with a team, to solve the problems of Ghana, and, thereby, bring relief and prosperity for all Ghanaians. That is his message.”

With Ghana’s GDP growth rate for 2015 hovering at some 4%, as opposed to a growth rate of 8.4% at the time the NPP left office, Alan Kyerematen explained that “this means we are retrogressing as a nation”.

He continued, “If someone who is giving you a growth rate of 4% tells you to vote for him again, then it means you are voting to retrogress. I am pleading with you, 2016, let us vote for Nana Akufo-Addo and we will all be witnesses to the change that will come to our country.”