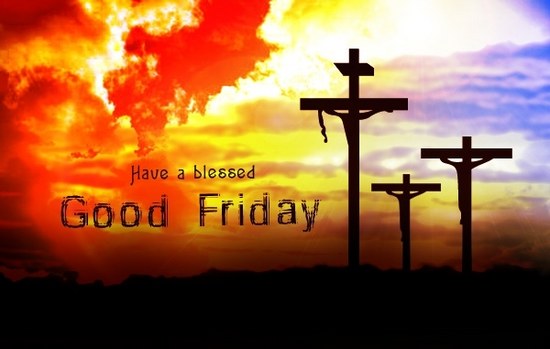 Christians commemorate the crucifixion of Jesus Christ and his death at Calvary.

Good Friday is a Christian religious holiday commemorating the crucifixion of Jesus Christ and his death at Calvary.

The holiday is observed during Holy Week as part of the Paschal Triduum on the Friday preceding Easter Sunday, and may coincide with the Jewish observance of Passover. It is also known as Holy Friday, Great Friday, Black Friday or Easter Friday,though the last term properly refers to the Friday in Easter week.

The biblical account of Jesus’ death on the cross, or crucifixion, his burial and his resurrection, or raising from the dead, can be found in the Scriptures.According to the gospels, Jesus was betrayed by Judas on the night of the Last Supper, commemorated on Holy Thursday.The morning following Christ’s arrest, he was brought before Annas, a powerful Jewish cleric.Annas condemned Jesus for blasphemy for refusing to repudiate Annas’ words that He was the Son of God. From there, Jesus was sent to Pontius Pilate, the Roman governor of the province.Pontius Pilate questioned Jesus but found no reason to condemn Him. Instead, he suggested Jewish leaders deal with Jesus according to their own law.But under Roman law, they could not execute Jesus, so they appealed to Pilate to issue the order to kill Jesus.Many Christians spend this day in fasting, prayer, repentance, and meditation on the agony and suffering of Christ on the cross.

Happy Easter to all our cherished readers