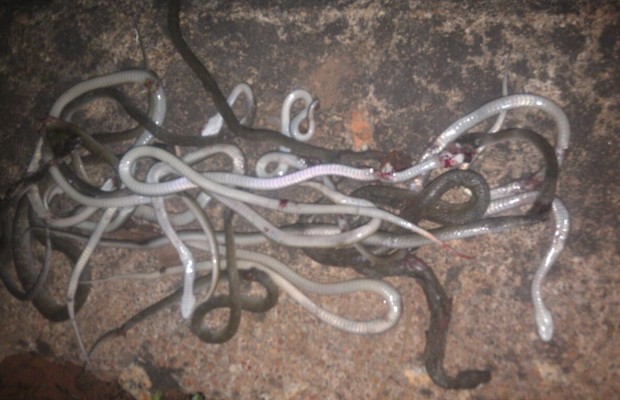 Fear stricken residents of Kwaso Denkyenso in the Ejisu Juabeng Municipality of the Ashanti Region whose homes are invaded by snakes at night for the past four days, are expected to heave a sigh of relieve after the area was fumigated Friday.

The village has been sprayed with chemicals to kill the reptiles or ward them off from accessing the homes of the residents.

Hundreds of snakes were killed in about seven houses on Wednesday, a situation which left the inhabitants full of trepidation.

No snake bites have been recorded yet, but the resident had earlier indicated that they just can’t go to bed peacefully as they are frightened to the core.

The residents who have been wondering how to go to sleep in the coming days, due to the worrying development are yet to see the potency of the chemicals used. Earlier they recounted their ordeal.

“We are stunned by this invasion of snakes. There are no over grown weeds and bushes around the town,  we are really at a loss where they came from. We have had sleepless nights since three days ago after the rains. By the time you realize you have these unwelcome visitors (snakes) already in your room. When you choose to sit outside, they gather at your feet. Someone killed 63, others killed 25 and 42 respectively and I killed 21 snakes just yesterday. The situation is very worrying and something needs to be done about it urgently” the Assemblyman noted.

But speaking to Kasapa News Friday, Assemblyman for the area, Patrick Frimpong stated that the spraying exercise initiated by the Ashanti Regional Security Council started around 4:00pm and it’s expected to end the invasion of the snakes.

He further called on authorities to provide the town with streetlights to illuminate the area, as the town is full of darkness during the nights, a situation he noted put the lives of the residents at risk.