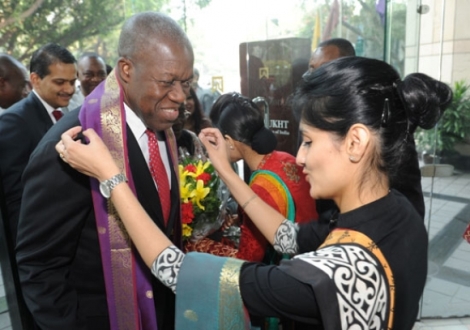 The Vice President, Paa Kwesi Amissah-Arthur, has arrived in New Delhi, India, for a two-day investment summit on Africa.

Accompanied by a delegation of Government officials and Ghanaian entrepreneurs, Mr Amissah-Arthur will address the opening session of the summit on Monday.

Dubbed the “11th Confederation of Indian Industry (CII) EXIM Bank Conclave on India African Project Partnership,” it is the single largest assembly of Indian industry players with their African counterparts under the auspices of both the Indian EXIM Bank and the CII.

The summit is expected to focus on agriculture, power, skills development and other sectors targeted for assistance under the improved Indian Government Lines of Credit to developing countries.

The Vice-President was in India in 2014 where he embarked on a four-day visit to the country. He met with the captains of Indian Industry. He also had interaction with the Chief Executive Officers (CEOs) of Indian industries and commerce. – Credit: Office of Vice President