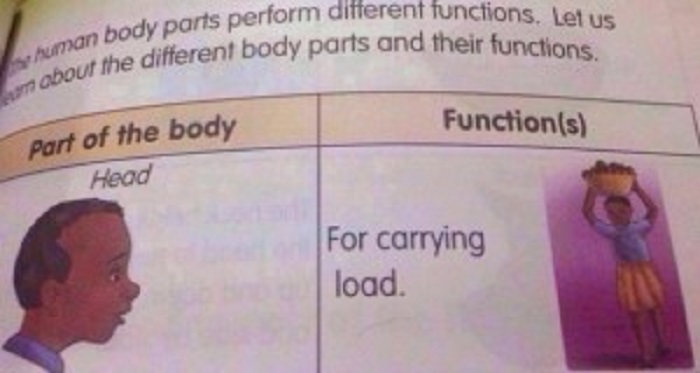 The Ghana Education Service(GES) says there is nothing misleading about the controversial ‘Prof. Quarm Series’ which classifies the human head as a body part used for carrying loads.

The Public Relations Officer of the GES, Rev. Jonathan Bettey has justified the author’s work insisting that as far as the curriculum at that level is concern the Professor is spot on with the answer given in his book.

“Do you doubt that answer that you carry load, water , as well as a basket full of cassava with your head? That is a book written by a professor for level one pupils. If you’ll attest to this fact, when we were children we carried water and other things with our head.

“Personally at this level I don’t find anything wrong with this answer.   When this child moves from stage one to stage two the question changes so as the answer,”he argued in an interview with Accra-based Joy FM .

The author of the much criticised book in his ‘Natural Science for Primary Schools – Pupil’s Book 1,’ has stated that the human head is used for carrying loads.

This classification has generated controversies on social media, with the Vice President of IMANI Ghana, Kofi Bentil, demanding the immediate withdrawal of the books from schools.