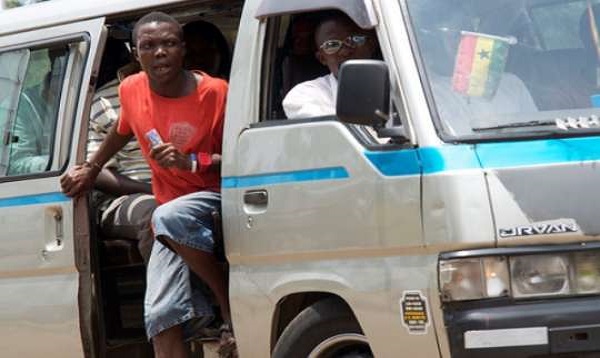 The Job of being a driver’s mate of a commercial vehicle is one difficult work, as it requires a lot of energy.

A day in the life of a driver’s mate usually starts before 5am and will typically end by 9pm.

While some of them are very disrespectful in the conduct of their work especially when it comes to communicating with passengers, others are very humble and well-cultured.

One characteristic that is associated with a lot of driver’s mate is their body odour which is thought to be so because of the amount of sweat collected in their dress as a result of their vigorous work. That situation is compounded particularly as several of them do not like to bathe before they start work.

In an interesting interaction, one driver’s mate told Kasapa 102.5 FM’s Leticia Ohene Asiedu that he dislikes bathing because he reduces in size whenever he does so continuously.

“For me I hardly bathe. Because the human being is made of sand, the more one bathes the more the body wears, recently I was told I had reduced in size and I realized that this was because I had taken my bathe continuously for one week, so I needed to put a stop to it for a while and suddenly I realized I was gaining back my weight.”