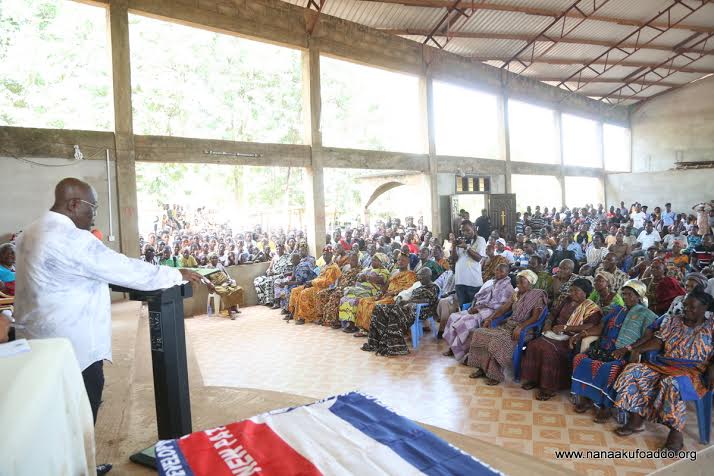 The 2016 presidential candidate of the New Patriotic Party, Nana Addo Dankwa Akufo-Addo, says the effects of the mismanagement of the Ghanaian economy by the Mahama government is no respecter of person or tribe, and is, thus, being felt by every Ghanaian in every part of the country.

According to him, the impact of the mismanagement of the Ghanaian economy is being felt by every Ghanaian in the form of rising costs of living, high utility tariffs, record levels of unemployment, fuel price hikes, a weak currency, dwindling economic growth, low real wages, high interest rates and a resumption of the erratic nature of power supply.

These effects, he added, must serve as a stark reminder about the fact that the choices the Ghanaian electorates make in choosing their leaders have consequences.

Therefore, the choice of who becomes President of Ghana in this year’s election must be devoid of tribal and ethnic considerations, but rather of competence.

“In this 21st century, we should not be interested in tribal and ethnic politics. It won’t get us anywhere. This century is about knowledge, technology and innovation. We want our best people forward. It is about competence, quality, honesty and integrity. That’s what we should be looking out for,” he said.

Nana Akufo-Addo made this known when he addressed separate meetings of 64 Chiefs from Akatsi South and Akatsi North, in Akatsi and Ave Dakpa respectively, on Friday, May 20, 2015.

Drawing comparisons between the case of Cote d’Ivoire, a country which, until 6 years ago, was embroiled in civil war, but has now become the number one investment destination on the African continent, resulting in an economic boom for the country, Nana Akufo-Addo stated that Ghana, once, in Kufuor’s time, the poster boy of economic success in Africa, is, however, on the decline.

“It shows you that correct policies, under correct leadership, can transform a nation. We can also prosper in Ghana. I am 100% convinced that we, in Ghana, can do even better than Cote d’Ivoire,” he added.

The purpose of his visit to the Volta Region, he told the gatherings of Chiefs, is “to come and repair the relationship between the NPP and the Volta Region. For too long there has been a distance between us, and it is in the interest of Ghana that this year, for this election, the Volta Region and the NPP walk side-by-side”.Nana Akufo-Addo urged the Chiefs and people of Akatsi and Tongu to “give us a chance this year. Let go of the propaganda. Give the NPP a chance, trust me, and I won’t disappoint you. I am coming to do a good job for all of us. We have a big programme for the development of our nation.”

On the request for peace, before, during and after the conduct of the 2016 election, which was made by Togbe Nyamekor Glakpe V, Fiaga of Ave Dakpa, who also doubles as the President of the Ave Council of Chiefs, the NPP flagbearer agreed fully with his call.

“We should all conduct ourselves in such a way that we will reinforce the peace and stability of our nation. But, while we are calling for peace, I would, respectfully, like people like you to add your voice to the call for clean, free and fair elections because that is the best guarantee of the peace and stability of Ghana. When you have a transparent, free and fair election that is your best guarantee of peace. It means that when the votes are counted, this is the voice of the people, and it is not some manipulation or ‘twenty-seven zero’. Then it is easy for all of us to accept the result of the election, like what happened in Nigeria last year which brought Buhari to power,” he said.