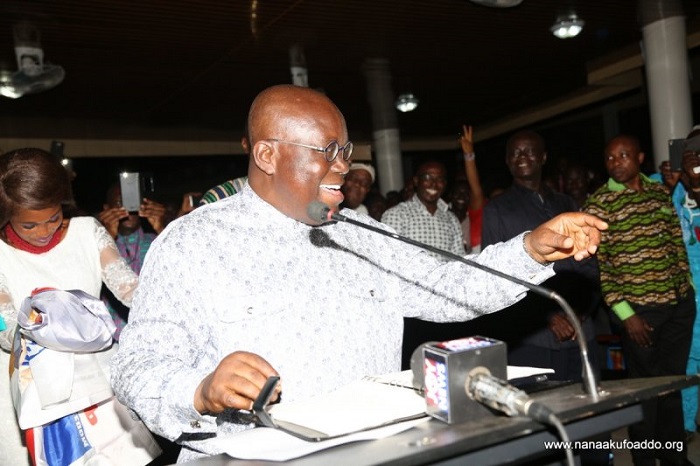 The Flagbearer of the New Patriotic Party, Nana Addo Dankwa Akufo-Addo, has condemned what he says is the piecemeal approach being adopted by the Mahama -led administration in the conversion of polytechnics into universities.

According to him, government’s decision to convert some polytechnics while neglecting others has created some challenges.

It will be recalled that earlier this year students of the Cape Coast Polytechnic expressed concerns over their exclusion from the list of six polytechnics to be transformed into technical universities in September, 2015.

This resulted in the disruption of academic activities on the campuses of these polytechnics, notably in the Cape Coast polytechnic.

Addressing students at the Cape Coast Polytechnic at the end of day 2 of his tour of the Central Region, Nana Addo expressed disappointment in government’s decision to exclude some schools in the conversion process.

“We cannot do this policy piecemeal. Either you are doing it for everybody, or you are not doing it at all. We can’t have a situation where some are picked and some are left out of the process. It is not a good idea. Let us make sure that all the polytechnics in our country, in each of the regions, have the same infrastructure and the same level of development. Then we can make the transition for all of them. But pick some and leave some out, then you are disadvantaging and destabilizing the ones that you have left out,” he said

“Everything that John Mahama does, there is no proper preparation and there is no proper follow through of the idea”, Nana Akufo-Addo assured the students of Cape Coast polytechnic that “when we get the chance (in 2017), we are going to make sure we do all together as one,” he added.

He further indicated that his administration is “going to make sure that the infrastructures of the polytechnics are fully developed, and that the collaboration between the polytechnics and industry is strong. That is what is going to make technical education the future of our country….. We are not in favour of the piecemeal approach to the conversion. We want all the polytechnics to be considered as one. That is the proper way to go ahead with this policy.”

“It is important that I speak out, because our President likes to copy ideas that I have. So let me put this out.”

Nana Addo said his government will also focus on building the industrial sector and enhancing Ghana’s agriculture when voted into power.

He added that his government will “give companies tax incentives, such as tax credits, so that we can encourage companies to employ fresh graduates, instead of having graduates sitting in the house for 4, 5 years and doing nothing.”