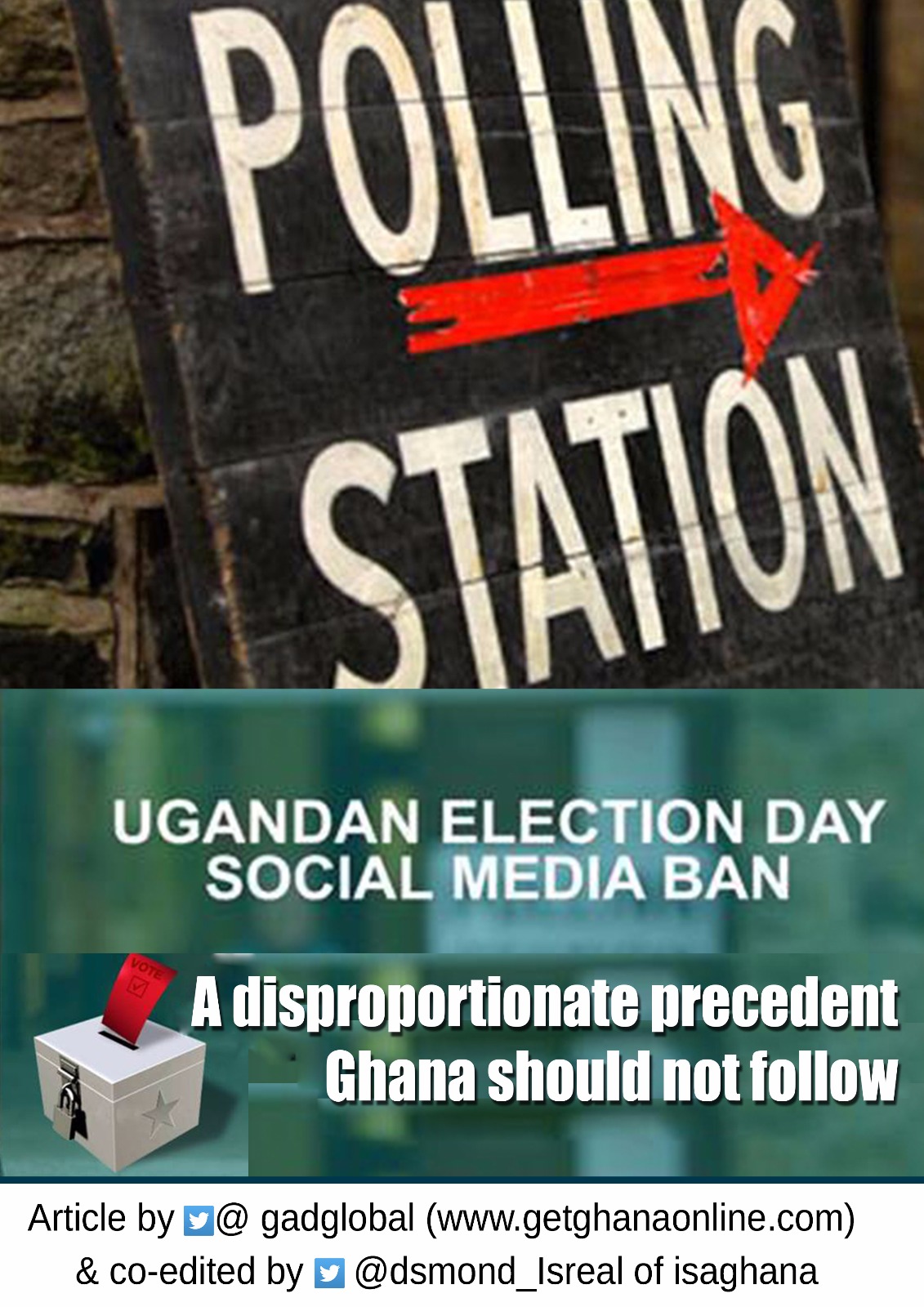 “It’s a breach of the law to campaign on Election Day,” Godfrey Mutabazi, executive director of the Uganda Communications Commission, said in an interview with private broadcaster NTV in the capital, Kampala. Mobile phone money-transfer platforms were also blocked, he said.

The platforms would be back on later in the day. (Story culled from www.bloomberg.com) Ghana is in its election year and as she prepares herself for the upcoming November 7 polls, the euphoria to the buildup has already started, with various persons posting all manner of content including image, text, video, and voice on social media platforms especially Facebook and twitter to promote their political agenda, excitements and aspirations.

It is a known fact, that Ghana’s election laws provides that all political campaigns should cease 24hour close to elections and it is important that this should not be the reason why the government may try to block social media platforms like Facebook, Instagram, Twitter amongst others during the election period as experience in the case of Uganda. Even though the ban on social media platforms entering into the November, 7 pollsmaybeapartofanumbersystemicmeasuresbythegovernmenttoprevent people from promoting and inciting dangerous ideas or posting contents that

As the real concept of social media is to give users a platform through whichtheycancommunicatetheirfrustrationsandsharetheirthoughtsrelatively cheaper and faster without inherent censorship and regulator drawbacks that traditional media outlets (Radio, T.V, Print) are subjected to; business and individuals have a ‘cyber-livelihood’ online via social media such as business transactions, marketing, customer interaction, support and helpdesk services, communicating with family and friends including emergency access, a ban on the use of social media in 24hrs have repercussions far reaching and must be justified before any such action.

The real after thought is whether or not to block one the other; but experts may say if you don’t block a number of them then one will not curb a security situation, so will it mean a total social media ‘blackout’, how substantial is where the interest is.

Moreover bans on social media must be justified in law to be in conformity with international laws and should not be wholly disproportionate.” As provided in Article 19 of the United Nations Universal Declaration of Human Rights quote: “Everyone has the right to freedom of opinion and expression; this right includes freedom to hold opinions without interference and to seek, receive and impart information and ideas through any media and regardless of frontiers”.

The apparent use of Social media influencers who will assume the role of educating their fans/followers on desisting from posting disturbing contents that may threaten the peace and security of the elections. 2. Concerned citizens of Ghana should take the matter of ensuring peace and stability during this election period seriously and be careful as to what we post on the various social media networks we join. For purpose of my readers who may not know; Social Media Influencers are people who have an established credibility and audience on social media; who can persuade others By virtue of their trustworthiness and authenticity. Enjoy a peaceful election 2016 and may we see the continuous development of our dear country thereafter. Gad Ocran is a social media practitioner at www.getghanaonline.com and also a level 400 Bsc. Telecommunications Engineering student at Ghana Technology University College (Formerly Ghana Telecom University College).