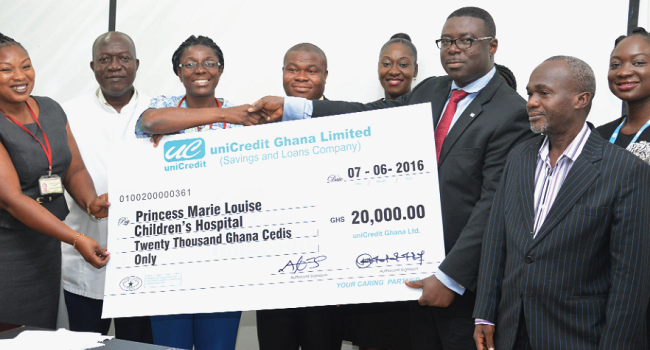 uniCredit has supported the 90th anniversary celebrations of the Princess Marie Louise Children’s Hospital  with an amount of GH¢20,000.

Making the donation to the hospital, the General Manager of uniCredit, Mr P.V Yeboah-Asiamah, recounted the relationship that had existed between uniCredit and the Children’s hospital over the past years.

He said uniCredit started the partnership with the Children’s Hospital through the establishment of a special needy fund which he said had grown over the years to cater for the needs of the less-privileged children who couldn’t have otherwise afforded medical care.

He noted that having come this far with the hospital, uniCredit considered it a special opportunity to support the hospital on the special occasion of its 90th Anniversary.

He said he was hopeful the support would help the hospital carry out its intended anniversary project.

The General Manager also hinted that as part of its commitment of improving its service offerings, the company had rolled out a consumer asset finance product (EazzLife) which was aimed at helping salaried workers to live comfortably.

He said the EazzLife product from uniCredit had been designed to enable salaried workers, especially those within the public sector, to acquire consumer items such as televisions, tablets and other necessary household appliances.

The chairperson of the 90th anniversary planning committee and a Paediatric Specialist at the Children’s Hospital, Dr Maame Yaa Nyarko, was grateful to uniCredit for its support towards the anniversary.

She said the support would go a long way to make its expectation for the anniversary project a reality.

She added that uniCredit had proven to be a reliable social partner and its partnership had been very beneficial.