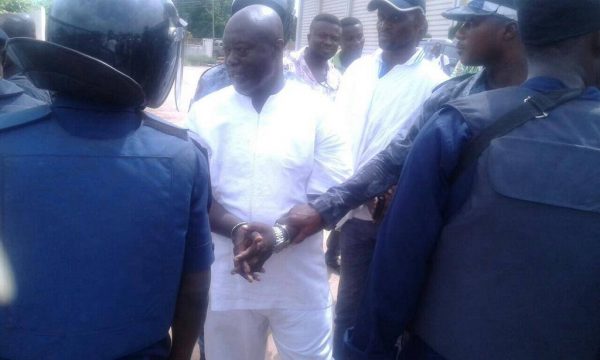 A Kumasi Circuit Court on Monday found Maxwell Kofi Jumah guilty of causing unlawful damage to electoral material.Jumah, a former Member of Parliament for Asokwa constituency in Kumasi and one-time Deputy Minister of Local Government and Kumasi Metropolitan Assembly (KMA) Chief Executive was convicted along with his campaign manager, Oscar Riches.The Daily Guide newspaper reported that the court presided over by Afua Adu-Amankwa sentenced Jumah to a fine of GH¢1200 or in default, spend six months in prison.Oscar Riches aka Ghana Beyeyie was also sentenced to pay GH¢960 or in default serve a prison term of three months.The court had earlier in the trial granted bail to the two of them in the sum of GH¢10,000 each with one surety.They were charged with two counts of causing unlawful damage to a photo album belonging to the Electoral Commission and resisting arrest.Jumah was said to have seized a ballot booklet from officials of the EC during the NPP parliamentary primary at the Asokwa constituency in 2015.He was in a contest with the incumbent MP, Patricia Appiagyei as part of efforts to try to relaunch his parliamentary career when the incident occurred.He had been deposed by Appiagyei and he was trying to cling back unto the seat.Officers from the Asokwa Police whisked him away before the elections ended and placed in custody overnight after a scuffle had ensued during the polls at the Ahinsan Youth Centre in Kumasi. – Graphic

2020 Polls: I’ll make sure you stay; I want nothing in return – Kofi Jumah to Akufo-Addo