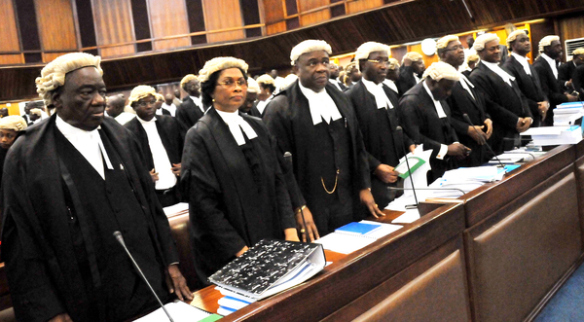 Supreme Court Judge, Justice William Atuguba, has admonished judges and magistrates across the country to live an isolated life from the general public.

He believes being anti-so will go a long way to safeguard the image and integrity of the bench because it will help them stay away from corruption.

He said it is better to be known wrongly as anti-so judge than to be rightly known as a corrupt judge.

The renowned Supreme Court Judge was addressing the annual magistrates and judges conference which is ongoing at the Labadi Beach Hotel in Accra.

Justice Atuguba commenting further also called for some reforms in the salary structure for judges.

He wants judges to be given a unique remuneration system different from all existing salary structure in the country believing that it will help motivate the judges to give their all and also prevent them from falling victims to bribery and corruption.

“I call on the Bar, the Judicial Council and the Bench to coordinate their efforts and engage the article 71 committees and other relevant authorities to press for, recognition of and response of the fact that the Bench has a unique and pivotal role to play in this country and its conditions of Service must correspondingly be unique and should not be considered in common with any generalized policy on pay structure or the like. “In this connection I call for the restoration of an enhanced leave allowance, substantial entertainment allowance, a handsome allowance for the loss of private professional practice as it is enjoyed by Doctors, Teachers and others,” Justice Atuguba stated.