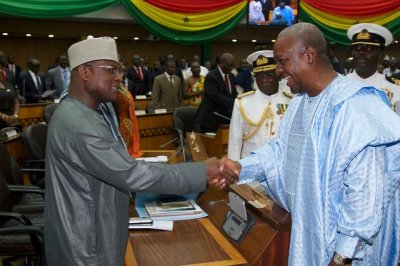 Minority Leader in Parliament, Osei -Kyei Mensah-Bonsu has described President John Mahama’s comment about the Minority caucus’ failed move to activate a bi-partisan probe into a Ford gift to him, as unfortunate to say the least.

President Mahama in an interview with Paul Adom-Otchere on Good Evening Ghana Tuesday, described the Minority’s action as “a frivolous waste of taxpayers’ money”, adding that the New Patriotic Party is engaging in “petty politicking” to soil his hard earned reputation.

He said he felt “sad” about the situation where Members of Parliament had to be recalled after being given transportation allowances and other incentives.

A motion filed by the Minority Legislators to have the Ford gift saga investigated, compelled Speaker Edward Doe Adjaho to recall the House which has been on recess.The Speaker dismissed the motion, on the grounds that Parliament could be usurping the powers of the Commission on Human Rights and Administrative Justice (CHRAJ) which is constitutionally mandated to look into issues of conflict of interest or breach of code of conducts.But speaking on Accra based Neat FM, Hon. Osei-Kyei Mensah -Bonsu stated that the President describing their move as a waste of time and resources clearly shows that he (President) does not even understand Parliamentary procedure, after serving as Member of Parliament for twelve years.

“The President is an elderly person, if he speaks and even does not choose his words well, as he did on this matter, one is always measured when responding to such a person. Otherwise looking at the language the President used, we should have put him at his proper place but, we can’t do that because of his stature. All I’ll say is that his comments were unfortunate, probably he was misinformed.” Investigative Journalist, Manasseh Azuri Awuni a couple of months ago, reported that President Mahama in 2012, received a 2010 Ford Expedition from his Burkinabe friend Djibril Kanazoe. The latter was subsequently awarded two contracts, which include the fencing of the Ghana Embassy Wall in Burkina Faso at a cost of $650,000 and also the construction of part of the Eastern Corridor Road Project.The presidency at the time of publication of the report admitted that Mahama received the said vehicle from Kanazoe but dismissed claims of corruption.The Youth Wing of the Convention People’s Party (CPP) and other private citizens took up the issue and petitioned CHRAJ to determine the conduct of Mahama to establish whether he breached the code for public officials.