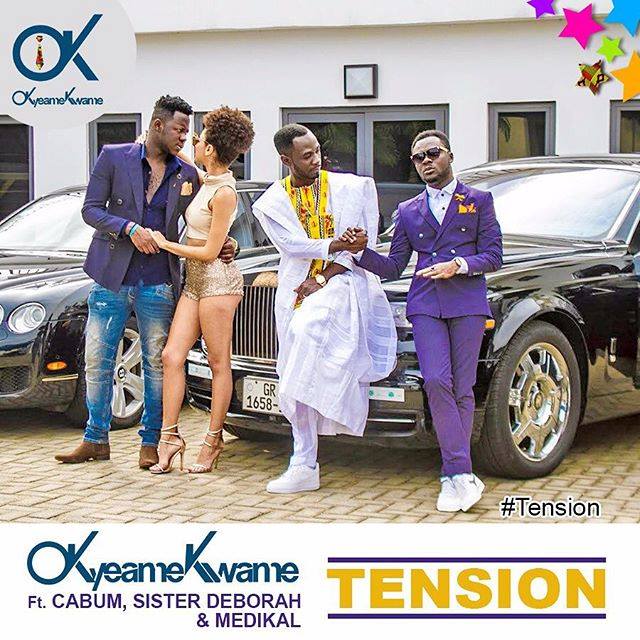 Like it is done for any other song, a Disk Jockey checks his mixer board, checks the speakers and then the turntables. He sounds a blast, followed by one or two sound effects and a signature jingle. He cues the song into Serato, slams the play button and the rest is left to the listeners. But we now have on our hands a tune that requires more than these accoutrements. This new song needs the listener to make an admittance  that the song is a delicacy, but a grenade of intricacies.

Have you ever applied a force to an object so fiercely that it stretches beyond its carrying capacity? It tightens, taunts and stretches. A rope will rapture. A guitar string will make a loud, unpleasant sound. A chain will break. A versatile rapper who’s inspiring creative difference will fill up with extraordinary energy, and will chant the slogan of KNUST’s Unity Hall:

This is called tension! It is a pull, stress, strain, or stretchname them. On this rope, we have four of the most scintillating Ghanaian rappers exerting traction. Okyeame Kwame is headlining this bout with all the aggression and magnificence it deserves. He features Cabum, Medikal and the sensational female rapper, Deborah Vanessa on this top-of-the range hip hop music.

There’s quite a clear message Okyeame Kwame is putting across. Unlike some other artistes who just came to your mind, the Rap Dacter is circumspect about blowing his own horn. Or let’s say he feels too modest to scream it out loud. And for a person of his persona with a decent linguistic skill, he comfortably finds an artistic way to push it. Simply put, he says hes got it and hes rubbing it in your face. Take it or leave it. That is what ’Tension’ communicates.

In the last song ‘Hallelujah’, he is simply saying ‘Hey, see how far I have come. Join me to praise God’. As if that isn’t well talked, he makes a quick comeback in another fashion. He feels he hadn’t emptied his heart well enough.

This song, together with ‘Small Small‘ and Hallelujah’  comes off his fifth upcoming album ‘Made in Ghana’. It is in a warm-up for the groundbreaking project that this song gives off so much heat.

So Okyeame puts up allusions, symbolisms, puns, insinuations, imageries and similes to boast. This is what rap has always been about – the showmanship, the braggadocio. But ‘Tension’ is a stand-out and a diversity in its entirety.

Take this for example:

(Now, they say I should tend at a bar, because I have too many bars)

The rapper puns on the word ‘bar’ which means ‘drinking spot’ in one context and a ‘musical bar’ in another, to state that he has made strides with his music career. He goes forward to associate himself with EIB boss, Bola Ray, who at 39 is a highly successful entrepreneur. Okyeame symbolizes his class with him to illustrate his league. He climaxes his status by further alluding himself to the fate of a Taliban suicide bomber, who regardless of his attainment, is resolved to ‘surely blow’ up as literal as it sounds.

Kwame has been well known for such affluent wordplays. It’s his seal. But just like the geographies of a typical rap music, some of the punch lines are not meant to be understood in totality. We are even not done with M.anifests Stockholm Syndrome and ‘Califragilisticexpiali’, ‘I’m precocious ‘.

Tension is addictive. It’s complicated. It’s tense. It’s wicked. It’s deep. It’s heavy. It’s dope. It’s everything. It’s everything we want in a hip hop tune. It is what we have yearned for, from Kwame after he broke the scene with Woso  some years ago.

The inclusion of Cabum Chedeshie and AMG’s Medikal is a thing much to be applauded. There is a remarkable reverence for the theme of the song by both guest artistes. Each of them makes classic deliveries. Cabum is in his elements and elucidates gallant lyricism. He keeps alive the existing tension that is arrested in the song. He sounds apprehended, edgy and agitated in a way that is unmeasurable by a tesiometer, even.

Cabum is such a good pick for this song no matter what you are looking at – whether it is his rap or the production. He makes the song his own, puts up a stunning spectacle with both words and instrumentation. We are convinced to believe his tension is indeed equivalent to the sum of ninety-two, five hundred and sixty-two and twelve. Do the math!

Tension be word you for mention

Rolling in my Mercedez, menyɛ Fante but Im still Benson

The above extract comes from Medikal who proves his possession of a formidable tensile strength. He is full of spirits and vaunts about how much substance he’s made of. The things he says in his verse are both amusing and thought-provoking. They are clothed in wordplays that leave the listener with jitters.

You may not necessarily understand a lot of the word craft from the rappers on this very song. But save that of Deborah Vanessa, whose message is crystal clear and concise. I mean, what she says here has been said before elsewhere, perhaps. She simply reiterates her ‘Uncle Obama’ and ‘Ghana Jollof‘ catchphrases, but does so with a touch of confidence and loudness mixed with flare.

I feel her presence on this team sheet was strategic. One, she carries an aura of controversy around her. Two, she is there to literally flaunt a gaudy self, flatter a pretty stimulating body and show off an enviable personality. And shes got it, too.

Not to rub shoulders with her male counterparts, Sister Debby keeps it short in these lines:

Uncle Obama dey bell me sef I no dey pick  Tension
Hair colour game strong I dey change am every week  Tension
Summer body A1, all year through on fleek  Tension
If I dey town, e no be joke. Blind men wan peep  Tension
Sister Debby, swag no yɛ heavy
I be the Ghana jollof, enti mo pɛ bi adi
See me on TV, you go believe me
Never try contest; very risky

When a hard core hip pop song is coming from a set of seasoned musicians or at least starred by one who is well versed in the art, it is not surprising if the song becomes an instant hit in a matter of days.

Tension is not only a physics term for strain, neither is it only the name of the song in perspective. It is also a synonym for what one feels after listening to ‘Tension’. The list is endless: worry, apprehensiveness, agitation, nervousness, jumpiness, anxiety, edginess, restlessness, tightness, rigidity.