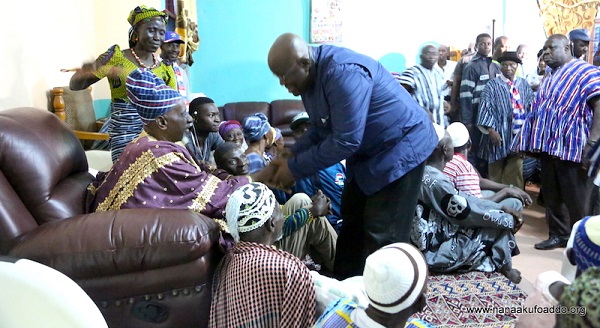 The overlord of Gonjaland, Yagbon Wura Tuntumba Bore Essa I, has promised to lend Akufo-Addo his support in his quest for power in the December polls.

“You have stated that your desire is to ensure that Gonjaland, in its entirety, moves forward. In previous years, Gonjaland made considerable progress. Now, we are in a recession. So if you are saying you want to move Gonjaland forward, then I embrace you warmly,” he told Nana Akufo-Addo on Friday, September 1, 2016,when he visited the Jakpa Palace, as part of his four-day tour of the Northern Region.

He stressed: “we have heard what you are saying to us, and we will pray to God for you so he grants you your heart’s desire. We will back you with prayers. The Presidency is yours.”

He was pleased that Nana Akufo-Addo has outlined policy interventions, including the ‘1-District-1-Factory’, ‘1-Village-1-Dam’ policies, to help create jobs in every part of the country, and stop the migration of youth from the North in search of non-existent jobs in the South.

The Yagbon Wura urged the NPP flagbearer to conduct his campaign based on issues and devoid of insults.

He pleaded with the 2016 presidential candidate of the New Patriotic Party, Nana Addo Dankwa Akufo-Addo, to  boost the water situation of his people should he win the 2016 elections as lack of potable water is the major challenge of the area.

According to him, residents of Damongo have been faced with the situation for years, and has appealed to Nana Akufo-Addo that “when Ghanaians give you their mandate, our request to you is that you help solve this problem of unavailability of water.”

The overlord of Gonjaland, in his remarks to the NPP flagbearer, also indicated that the lack of jobs for the teeming masses of unemployed youth was a source of great worry for him.

Ghana is a rich country

Nana Akufo-Addo, in his remarks to Yagbon Wura Tuntumba Bore Essa I, noted that Ghana finds herself in difficult times under the leadership of President Mahama, which, thus, requires a change, this December, in national direction and leadership so Ghana can be restored onto the path of progress and prosperity.

“Our country is a rich country. It is poor governance that is keeping us where we are today. We have an opportunity this December to change the circumstances of our country. So I have come to appeal to you for the support of yourself and the people of the Gonja Kingdom,” he said.

He continued, “We, in the NPP, have the men and women who can give this country a first class government, and we have the policies that can get our country working again, create jobs for young people and bring about an improvement in the quality of life of all Ghanaians.”

The NPP flagbearer noted, in response to the request by the Yagbon Wura for the provision of potable, drinking water, that it is for such a reason why he has announced the setting up of the Infrastructure for Poverty Eradication Programme (IPEP).

This programme, he explained, will allocate US$275 million per year to tackle issues relating to infrastructural development and poverty eradication in rural and deprived communities across the country. This amount translates into US$1 million per constituency per year, to address the developmental needs of all constituencies across the country, and in this case the provision of water for Damongo.

“We can do it because our country is not a poor country, our country is rich. With proper, honest government, all these things I am talking about can be done, so we bring progress and prosperity to all Ghanaians,” Nana Akufo-Addo said