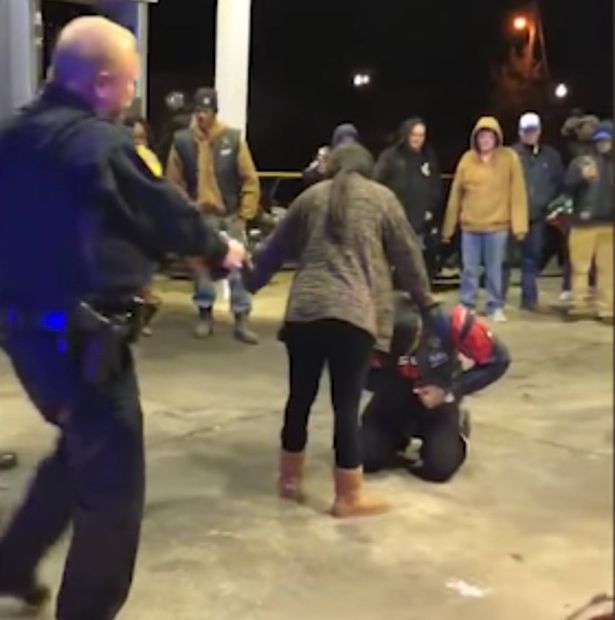 A man certainly made his other half’s pulse race when he got down on one knee and proposed – but not necessarily in the right way.

Daiwon McPherson proposed to his fiance Shawna Blackmon with the help of two ARMED cops .

The groom-to-be , from Alabama, USA, staged a fake arrest so he could get down on one knee.

With the assistance of the Mobile Police Department he managed to pull off the prank.

But what did his fiance think?

In a video of the unusual proposal, which has gone viral since it was posted online, Shawna bursts into tears.

But if they’re good tears or bad tears is anyone’s guess.

The footage, which has notched up more than 10 million views, was filmed at a petrol station and shows the police officers speed into the forecourt.

Motorcyclist Daiwon takes off his helmet and starts to kneel at the policemen’s instruction.

When his girlfriend approaches the officers she tells the policemen she is Daiwon’s wife and they shout at her to get his gun.

Keeping her arms up and trying to keep calm the situation, Shawna says: “I will. If you back up I will get it.”

But as she leans over Daiwon, who reaches into his shirt, instead of a gun he pulls out a white box and presents Shawna with a ring.

In total shock, Shawna raised her hands to her mouth in disbelief when she realises what is going on.

She then walks away crying while the crowd cheers.

The proposal certainly left Shawna with a racing heart and butterflies in her stomach – but did it end well for Daiwon?

We can reveal that Shawna said YES.

She later posted on her social media page: “I never thought that I would ever feel this way towards anyone in my life, today I said YES for the 2nd time but this time to a different man.

“I love you so much baby and thank you for everything.”