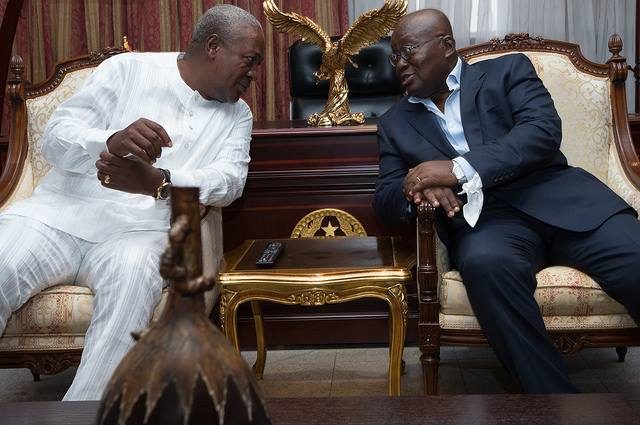 President John Dramani Mahama  has appealed to President-elect Akufo Addo to sustain Ghana’s growth when he assumes power on January 7, 2017.

According to the President, Ghana is on the verge of social-economic break through due to the solid foundation laid hence only needs the needed human resources to meet the needs and demands of industries.

He said his administration has ensured massive investment in education over the years adding that his solemn wish for incoming government is to sustain the gains made by the NDC led government for the betterment of Ghana.

“It is my prayer as I prepare to hand over the administration of the country on January 7  next year that, our exploit and initiatives will be sustained for the betterment of our dear nation Ghana”.

President John Dramani Mahama on Thursday cut sod for the construction of the University of Environment and Sustainable Development at Somanya amidst sad emotions by aggrieved supporters of the NDC.

The 45 million pound  commercial agreement Fund for the project between the government of Ghana and Italy  has been approved by Parliament .

President commended Parliament for passing the necessary agreements for the realization of the university in particular the Education select committee.

The President announce that,the First Vice Chancellor for the university will soon been appointed following the completion of work by the implementation committee.

The Proposed university is aimed at ensuring a paradigm shift in the tertiary education sector with focus on training Environmental and Sustainable development professionals in Ghana through its general and specialized degree programs.

The programs to be offered by the University include Research into climate Change,water resource development, energy sustainability and energy economics and sustainability, Urban Architecture, Natural resources, Environmental science, Environmental policy among others.

President Mahama said the University has its main campus at Somanya with settlite campus at Donkrokrom -Afram plains.

One of the  graduate schools will have three research centers ( Center for Agro Entrepreneurship and Center for Agriculture and Biotechnology , Center for Sustainable resource development)

According to the President, Land for the University has been properly secured and documented diffusing notion of litigation on the site.

President Mahama urged all stakeholder to collaborate with the New government to ensure that the project becomes a success.

The Acting President of Yilo Krobo Traditional Area,Nene Odorkor Tuumeh, commended president Mahama for “courageously overcoming challenges that arose in his quest to establish the University and making it a reality.