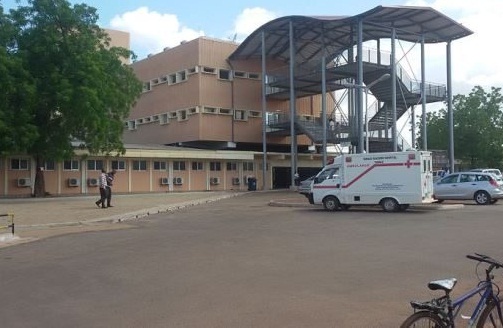 Kandahar Boys – a vigilante group of the ruling New Patriotic Party in Tamale – besieged the Tamale Teaching Hospital Tuesday evening and locked up the office of the Chief Executive Officer.

The group had targeted some top officials including the director of human resource Mr. Misbaw Mohammed, Dr. Abass and the CEO Prosper Akangbon, who they accused of mismanagement.

None of them was present when the dreaded group arrived at the health facility, but a written message was left on the door of the CEO warning him to “keep off until further notice.”

The group’s mission was to force these top managers out of office after details emerged that the hospital’s management directed and compelled anesthetics to administer expired anesthesia drugs on patients.

Leader of the notorious group Abdul Hack told Starr News they took the decision to prevent another group from picketing the premises as stepped up measures to force the CEO to stand down.

Regional pressure groups intensified calls for the top management to step down and be investigated by the Bureau of National Investigations and the Food and Drugs Authority, and therefore decided to begin the mission by picketing the hospital.

But the Kandahar Boys believe the planned picketing could be chaotic, affect service delivery hence their decision to be proactive.

“The reason for their picketing is to go to the hospital and be there till the CEO steps down so we had understanding that if this is the reason they are going to be there, then let’s not go there with crowd. The CEO is the problem, and then going to the hospital would scare away most doctors and nurses and most patients won’t get attention and if he (CEO) would be the cause then we have to make the hospital be at peace, everything should be running smoothly; the hospital would now know that we lock the hospital for it to be running”, Hack narrated.

Earlier attempts by the group to takeover and lock up offices of some government agencies in the regional capital including the Savanna Accelerated Development Authority (SADA) have been quelled by security forces. The agencies are now operating under a 24hr security protection.

Police arrived later and patrolled briefly and left without tampering with the attackers’ new locks.

Mr. Prosper and his embattled colleagues having foreknowledge about the attack reportedly escaped and sought a day asylum in the campuses of University for Development Studies (UDS) where he is a tutor.

Residents have called for the removal of the CEO since 2015 for nepotism, corruption and abuse of human rights and reducing the major referral health center to a death trap.

The CEO during the elections was accused of being an active member of the National Democratic Congress and running the facility like a private entity to finance the party’s campaigns.