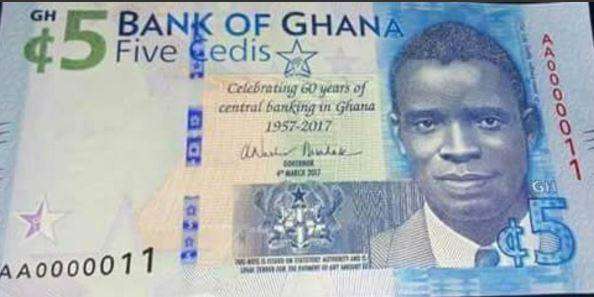 The 5 cedi note has already been distributed across the country and members of the public can access it effective today in their respective banks, officials say.

Explaining some the features on the GH¢5, a member of the Currency Department of the Bank of Ghana, Mr. Dominic Owusu told the public that the new note is smaller compared to the old five cedi note.

When the note is tilted , a Black Star motif makes an up and down pulsing motion while a white 5 figure on the ribbon stays still, Mr. Owusu revealed.

He stated that a portrait of Dr. James Kwegyir Aggrey is visible from both sides when the banknote is viewed towards the light.

He also added that under the portrait of Dr. Aggrey there is a watermark highlight on the 5 figure.

“The colour of the denomination figure GH¢5 at the top left changes from green to blue when the banknote is titled while behind the note is the FPSO Kwame Nkrumah,” he said.

The new note could also allow holders scan the currency, using  a mobile phone app to access the Bank of Ghana (BoG)website directly.

Officials of the Central Bank say this is the first time such a modern feature has been embedded on a national currency.

The new GHc5 was introduced to climax the celebration of the central bank’s 60th anniversary, which will take place in August 2017.