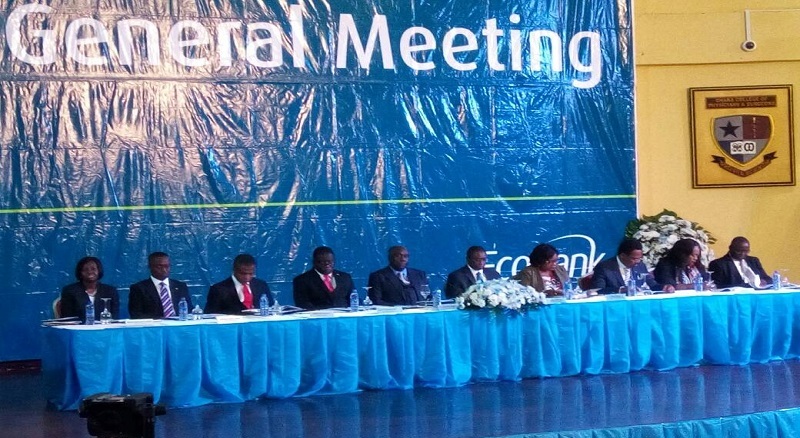 Ecobank Ghana Limited has announced an increase in the bank’s total revenue of GHS1.2 billion for the year 2016, representing an 18 percent growth from the 2015 performance.

Per the increase, the Board of Directors of the bank has declared a dividend of 82 pesewas per share at an Annual General Meeting (AGM) held in Accra.

According to the bank, the Non Performing Loan (NPL) ratio in the same period decreased to 15.8 percent compared to 18.0 percent in 2015.

Speaking at the AGM, the Board Chairman, Mr. Terence Ronald Darko stated that the bank has also maintained a positive liquidity gap which will push the bank to higher growth levels.

“To shore up our liquidity position, our portfolio of instruments is well diversified in currency and other investments to provide optimum liquidity,” he said.

Highlighting the bank’s performance, Mr. Darko was of the view that the bank performed well despite the tough operating environment in the period due to strong gains from de-recognition of financial assets relating to the oil sector.

He stated for example that the bank was able to grow its deposits by 12% , with Non-Interest bearing deposits constituting the bulk of deposits at 75% of the total .

On profit before tax, Mr. Darko disclosed that the figure amounted to GHS462.7 million and was driven downwards by increased loan book impairments.

“Impairment charges were up 54% from GHS 116 million to GHS179 million. Operating cost GHS566 million was 26% over the previous year. Our cost to income ratio was however still impressive at 46.94%. The ratio compares favorably to the industry average and is a testament to improvement in our return on assets and successful outcomes of our cost cutting initiatives,” he explained.

On Corporate Social Responsibility, Mr Darko revealed also that during the 2016, Ecobank had keen focus in the areas of education, health, sports and environment among others.

He said the bank offered support to various educational institutions in Ghana examples including sponsoring the construction of an ultra-modern administration block for the Village of Hope School at Gomoah Fetteh in the Central Region in addition to the ongoing educational scholarships the bank offers for some selected students.

“we have maintained our partnership with the National Partnership for Children’s Trust and are currently sponsoring 19 underprivileged students in various Senior High Schools and also equipped the computer laboratory of the La Nkwantanang Schools with air conditioners in addition to the 20 computers donated during Ecobank Day Celebrations” he added.

In the health sector, the bank collaborated with the Children Heart Foundation to sponsor the heart surgery of three children and Ecobank Ghana organized its maiden institutionalized internal blood donation exercise dubbed ‘Blood is life’ to restock the blood banks of two major hospitals of the country to save lives of people in need.

The Managing Director of the bank, Mr Daniel Sackey, stressed management’s commitment to deepen financial inclusion by “leveraging the rising trends in mobile adoption across the country to improve convenience and accessibility for you our cherished clients.”
Ecobank Ghana in 2016 successfully introduced the Ecobank Mobile App to aid its customers to make instant payments and to receive funds from any bank with Ghana and across all 33 countries in Africa where the bank operates.