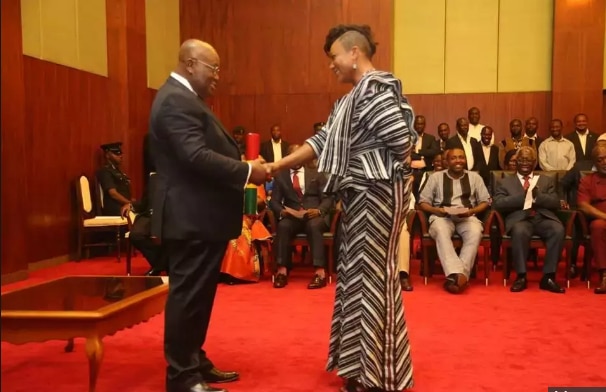 The two made the headlines over the weekend as they went out of control taking an intransigent position over party matters that ought to have been settled quietly within their ranks.

The outspoken Northern Regional Chairman of the NPP last week Friday lost his temper and disrupted a meeting that was underway led by the Minister of Gender, Children and Social Protection Otiko Afisa Djaba.

The controversial chairman in the company of some women affiliated to the NPP stormed the meeting vandalizing properties in protest to what he described as the Minister’s disregard for his high office claiming she did not seek his consent before convening her meeting.

Mr. Naabu who described the meeting as “illegal” noted that the Gender Minister has no right to come to the region to organize a meeting without first informing the regional executives, saying that even the president would not throw his weight about in such manner.

“I have told the Minister point blank what she did was wrong. It is unconstitutional and therefore her meeting is illegal,” he declared to the admiration of the women accompanying him.

On the other side, the Gender  Minister, Otiko Djaba who was livid about Chairman’s Naabu boisterous bahaviour accused Bugri Naabu of handing out government jobs in exchange for items such as cows and goats.

But as the dust settles on the matter, Ms Djaba says she’s rendered an apology to President Akufo-Addo over the altercation.

She told Joy TV’s Pulse Programme on Tuesday, however, she refused to apologise to Naabu.

“I went to see the president and apologised to him and told him it was not in the interest of Ghana,” the national women organiser of the ruling New Patriotic Party said.

She added: “I think that we need to respect women in this country 60 years on in Ghana…I felt disrespected by him(Naabu) and if it were a man he wouldn’t have done that.”