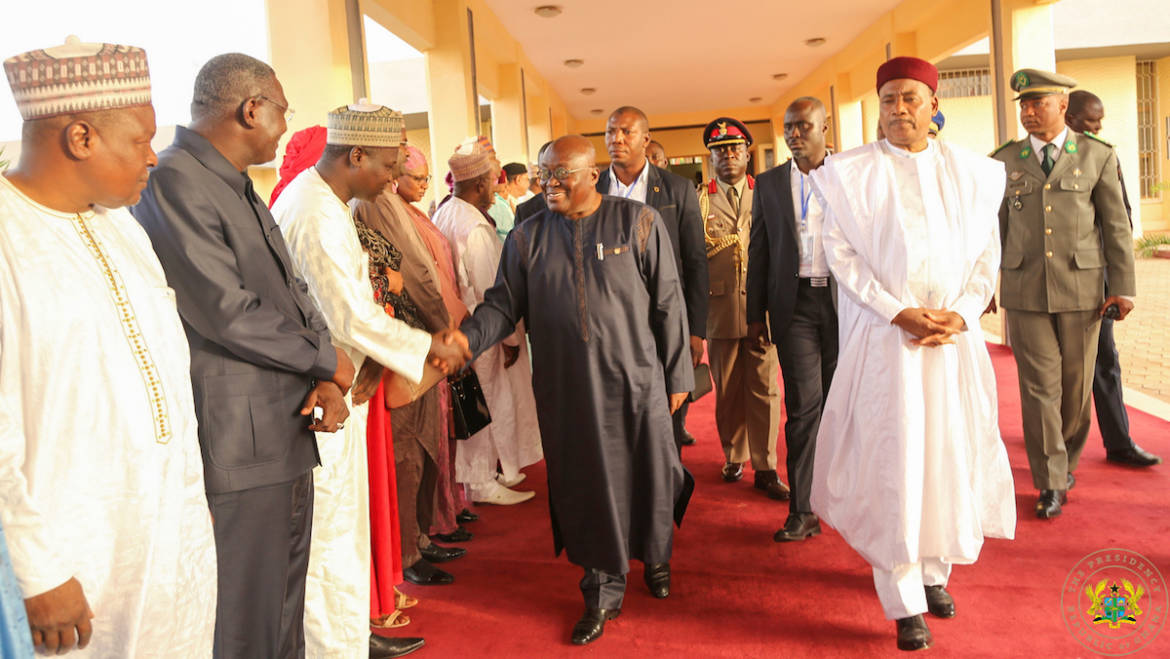 The President of the Republic, Nana Addo Dankwa Akufo-Addo, on Tuesday, May 30, ended the third phase of his tour of the ECOWAS countries with a day’s working visit to the Republic of Niger.

At a meeting with Nigerien President, His Excellency Issoufou Mahamadou, the two leaders pledged to strengthen the ties of co-operation that exist between their two countries, and hold this year in Ghana, for the first time in 31 years, a Permanent Joint Commission on Co-operation to serve as the legal framework to address their trade and investment concerns.

Expressing concern about the low volumes of trade between the two countries, President Akufo-Addo stressed the critical importance the regional market of ECOWAS represents to the development of West Africa, as the region, whose population is set to hit 500 million in 20 years, represents a genuine market with immense opportunities for trade, enterprise and ingenuity.

To this end, the President urged his Nigerien counterpart to help in the advocacy for the implementation of the ECOWAS Trade liberalisation Scheme (ETLS), which is expected to eliminate the impediments and challenges associated with the free movement of goods, persons and services in the region.

With ECOWAS having assigned to Ghana and Niger the task of seeing to the introduction of a common currency in West Africa, the ECO, President Akufo-Addo noted that the different currencies in the region have become an impediment to free trade, and thus, the need to expedite action on the introduction of the single currency.

Additionally, President Akufo-Addo noted that a Common Agricultural Policy, the West African Power Pool, and a Common Tariff regime, amongst others, are examples of good policies which should put into effect in West Africa and just not remain on the books of ECOWAS.

With the modernisation and diversification of Ghanaian agriculture being one of the priorities of the Akufo-Addo government, President Akufo-Addo proposed the strengthening of co-operation between Ghana and Niger in the area of agriculture, especially as 40% of Niger’s GDP is from agriculture.

President Akufo-Addo also indicated Ghana’s preparedness to share with Niger her experiences gained in the management of its oil and gas resources, since its discovery in 2007, as well as the measures taken to ensure the prudent and effective use of the proceeds from their sale. He noted that Ghana is well-placed to share with Niger the dos and don’ts in the effective management of oil and gas revenues.”

Touching on the fight against terrorism, President Akufo-Addo assured President Mahamadou Issoufou that “in Nana Akufo-Addo and in his government, the people of Niger have a strong and steadfast friend.”

He expressed the appreciation of the peoples of West Africa for “the sacrifices the Nigerien people, who are in the frontline of the fight against terrorism, are making to guarantee the peace and security not just of their own country, but the region as a whole.”

To this end, he reiterated Ghana’s commitment to “standing beside you in that fight and want you to know that whatever, within our modest means, we can do to promote the success of that struggle, you can count on us.”