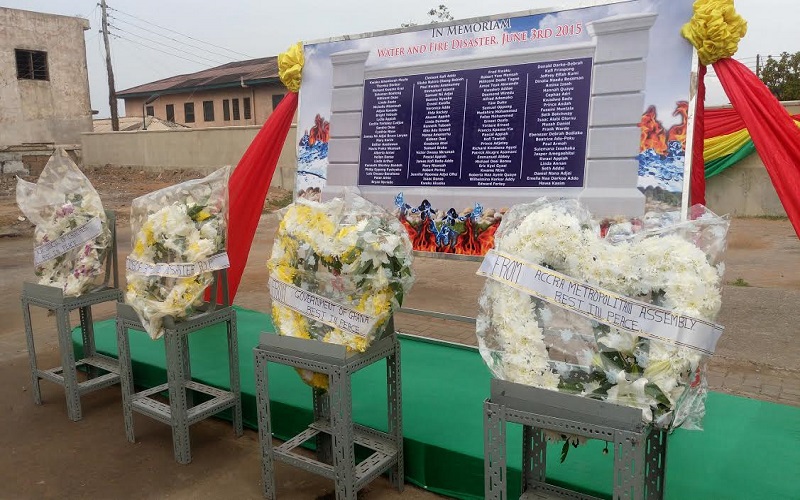 A memorial church was, Saturday, held at the Calvary Baptist Church in Adabraka, a suburb of Accra, in remembrance of victims of the June 3 flood and fire disaster that rocked the country.

In attendance were families of the deceased and surviving victims many of whom could easily be identified by the burnt scars on their bodies. Government officials from various Ministries, Departments and Agencies were also present.

Prayers were said for the spirit of the departed souls as their names were mentioned one after the other. The surviving victims were also committed into the hands of God as they continue to battle with life after the horrible incident coined by many Ghanaians as “Black Wednesday”.

Minister for Works & Housing, Hon. Samuel Ata Akyea, commenting on the incident expressed the belief that never again would that incident happen to Ghana.

However, he said that could only be possible if the citizenry change their attitude towards the environment by putting an end to the habit of littering around, especially, in drainage facilities.

He commended Dredge Masters, a subsidiary of waste management giants, Zoomlion Ghana Limited, for the quick response to the situation in helping to save lives and properties.

“I must say that but for the humane attitude of a company called Dredge Masters, an affiliate of Zoomlion, the situation could have been worse. Dredge masters was working day-in-day-out because of the human dimension to the company. You know companies are very commercial in their orientation. Without money, they won’t work. Sitting on my desk are various bills that we need to pay them. We have this disease that a contractor can be owed six years after completion of work and expect that the contractor will be impoverished and the rest of it. But a Ghanaian company called Dredge Masters… they have not been paid off but nevertheless, they are still working because some catastrophes are more serious than posting dividends and profits. So, please when we are acknowledging those who have played a major role in this issue, we should remember Dredge Masters and Zoomlion,” he noted.

The Chief Executive of the Accra Metropolitan Assembly, Mohammed Adjei Sowah, on his part paid glowing tribute to the spirit of the departed souls and wished the surviving victims well in all their endeavors.

He used the opportunity to remind residents in Accra about the President’s vision of making Accra the cleanest city in Africa by end of his tenure in office and therefore noted that the Assembly will not relent will not renege on this promise.

“We have decided that on the National Sanitation Day will be an enforcement of our bye laws to check all city dwellers who decide to make the environment filthy,” he posited.

In the middle of a heavy flooding and rainstorm mid-night Wednesday, June 3 2015, an explosion at Kwame Nkrumah Circle Branch of the GOIL filling station in the capital Accra, killed at least 150 people that plunged the whole nation into an official three-day national mourning.

The streets of the capital from the accident scene were littered with bodies while some were found in drains taking authorities weeks to clear the remnants of the disaster.

The morgues were congested with bodies and hospital authorities were overwhelmed with casualties from Ghana’s worst ever disaster that happened on June 3.

The incident which happened in 2015 has imprints of sadness, and sorrow till date and likely to leave indelible scars in the minds of Ghanaians.