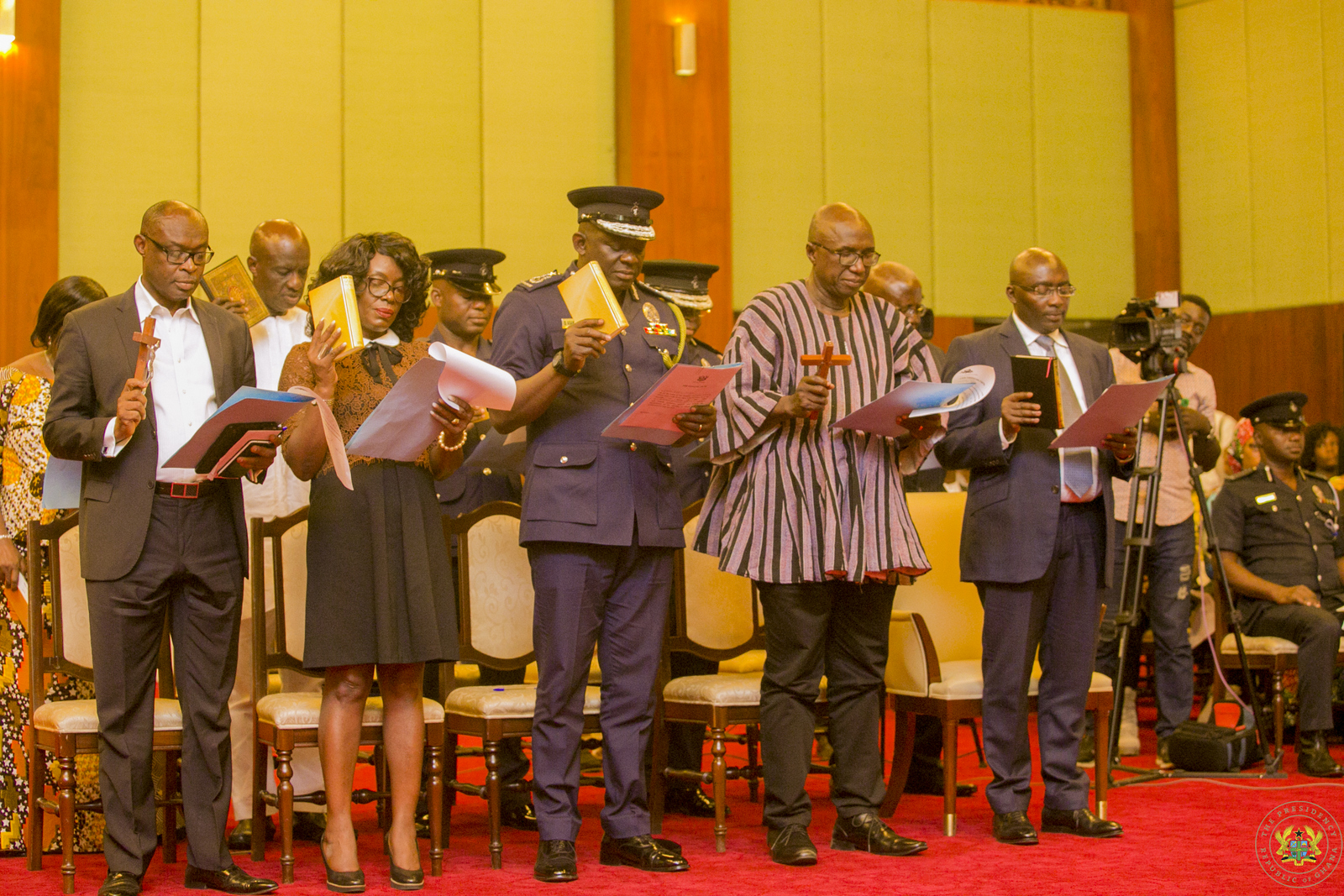 The President of the Republic of Ghana, Nana Addo Dankwa Akufo-Addo, on Thursday, July 6, 2017, swore into office the members of the Police Council, which is chaired by the Vice President of Republic, Alhaji Dr. Mahamudu Bawumia.

According to President Akufo-Addo, the Police Council is one of the most important organs of the State, and, as such “I am counting on you, its members, to give me strong, independent advice in the maintenance of law and order in the country.”

The Police Council, as set out in Article 203, is mandated to advise the President on matters of policy relating to internal security, including the role of the Police Service, budgeting and finance, administration and the promotion of officers above the rank of Assistant Commissioner of Police.

The Constitution has also given the Council, whose membership includes the Vice President, the Minister for the Interior, the Attorney General and the Inspector General of Police, the power to make regulations or any other law for the effective and efficient administration of the Police Service.

President Akufo-Addo noted that the most important thing for a nation is the peace and safety of its people, and its territorial integrity. It is when these are guaranteed, he stressed, that citizens can go about their lives in security, and hope to improve upon the quality of their circumstances.

“We all sleep, feeling safe, when the men and women of the Police Service work to keep our nation and our streets safe. The issue of law and order is particularly germane at this time when indiscipline, lawlessness and outbreaks of mob justice are threatening the rule of law. The Executive is determined to work with the Police Service to guarantee the security of citizens in accordance with the rule of law,” he assured.

The President reiterated the commitment of his government to, amongst others, resource the Police Service adequately for it to continue to maintain law and order and protect lives and property, in consonance with the NPP’s pledge in its 2016 Manifesto.

To this end, President Akufo-Addo revealed that his government will improve the accommodation needs of the Police, build two new police hospitals at Sunyani and Bolgatanga to serve their health needs, as well as build two new police training schools, all this with the view to improving the quality of the police service and the welfare its personnel.

With the Police Service suffering lower public image than it should, and with report after report of the Afrobarometer citing the Service as the most perceived corrupt public institution in Ghana, President Akufo-Addo charged the newly constituted Police Council to ensure that this perception no longer holds.

“The citizenry can only have confidence in the Police Service when they are seen to be honest and would enforce the law without fear or favour. Your task during your term of office is to ensure that this perception no longer holds,” he added.

The President indicated further that it is in everybody’s interest that the Police Service retains the neutrality and professionalism guaranteed under the Constitution.

“Governments have term limits, and in a multi-party democracy, parties win and lose power. It is good for the health of the nation that this is so, and this is why the Police Service should not tie its well-being or otherwise to the fortunes of the ruling party of the day,” President Akufo-Addo stressed.

Together with the members of the Police Council, President Akufo-Addo stated that “we must ensure that the Police Service is left to focus on its core mandate, and not be an appendage of the ruling party. I envisage a Police Service that goes about its duty of protecting ordinary citizens confident that there will be no interference from the powers that be.”