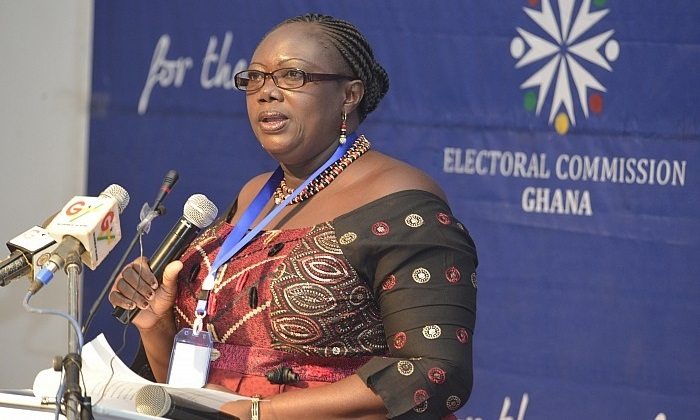 An embattled deputy Chairperson of the Electoral Commission (EC) of Ghana in charge of Corporate Services (CS), Georgina Opoku-Amankwa, says per the office she is occupying, she has the capacity to sign contracts on behalf of the election management body at any giving day and time should the need arises for her to do so.

She has therefore admitted to signing contracts with GH₵39million on behalf of the EC between the months of July and August 2015.

Chairperson of the EC, Charlotte Osei had accused her for signing contracts worth GH₵39million or possibly higher without her knowledge and authorization between the months of July and August 2015 among other things.

But Madam Opoku-Amankwa responding to the issue in her defense against the twenty-five (25) points of allegations leveled against her by the Chairperson of the electoral management body, said the processes leading to the signing of the contracts under reference had long been completed before her boss, Charlotte Osei took over from Dr. Kwadwo Afari-Gyan.

“As a matter of principle and convention, the Chair of the Commission’s Entity Tender Committee (ETC) signs award of contract letters. As a result, the contracts under reference had already been approved by the Entity Tender Committee (ETC) which I was the chair. These contracts had been evaluated, reviewed and approved before the Commission gave the Chairperson of the ETC the mandate to sign. The contracts were in respect of procurement of election materials for the District Assembly elections. I was therefore in an official capacity to sign those contracts and so did I. It is important to underscore that the processes leading to the signing of these contracts had been concluded prior to her taking over as the Chair of the ETC,” she noted.

According to her, subsequent to Madam Charlotte Osei’s assumption of duty as the Chair of the Entity Tender Committee (ETC), she ceased to sign contracts on behalf of the Commission.

She however stressed that the Commission was not built around the chairperson and therefore, Charlotte Osei’s insatiable quest “to seek exclusive jurisdiction over the administration of the Commission defeats the logic of contemporary corporate practice.”

“Election is time-bound and action-packed; therefore, failure to sign contracts timeously has the potential of putting the election calendar at peril. Given the fact that the Chairperson recluse herself from office without informing the deputies, there were few occasions I had to sign contracts in her continuing absence. This was done to ensure that the 2016 General Elections were not in jeopardy. This allegation is therefore frivolous, unmeritorious and borne out of bad faith.”