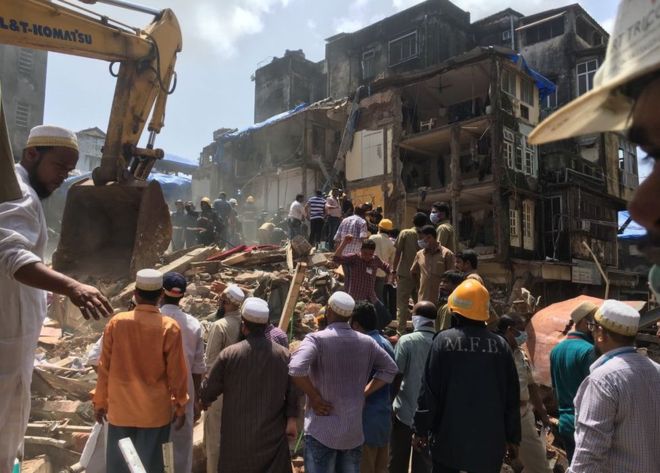 At least seven people have died and rescuers are searching for dozens who are feared trapped in a building collapse in Mumbai, police say.

A six-storey building toppled over in India’s financial capital on Thursday.

The building in the densely populated Bhendi Bazaar area was believed to be about 100 years old.

Ambulances, fire engines and members of the disaster relief force are working at the site. Mumbai is recovering from heavy rains and flooding.

“Forty people are believed to be stuck inside and a 43-member team is conducting rescue operations,” an official for India’s National Disaster Response Force (NDRF) told AFP.

This is the third building collapse in Mumbai in less than a month. Police suspect that Tuesday’s torrential rain weakened the structure of the building that collapsed.

Whether that’s proven or not, questions are likely to be asked about why so many residents of this growing city are allowed to go on living in old and dilapidated properties.

Property prices and rent in Mumbai are among the highest in Asia.

High quality housing is in short supply and so people have no choice but to live in sub-standard and crowded buildings.

This particular building was slated for redevelopment but people were clearly still living inside it even though it was about 100 years old.

Municipal authorities say they have stepped up efforts to evacuate dangerous buildings and demolish them. Clearly that isn’t happening fast enough.

Building accidents are not uncommon in India, particularly during the monsoon season. Poor construction standards and dilapidation are often to blame.

Every year, dozens of people are killed in building collapses across India.

There have been three in Mumbai in the past month. In July, 17 people were killed when a four-storey building collapsed in the suburb of Ghatkopar.

I’m not building a mansion in Damongo – Abu Jinapor