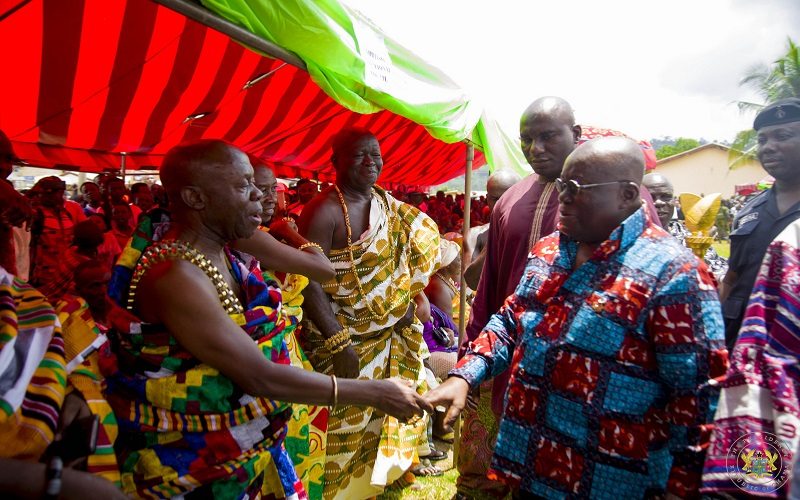 The President of the Republic of Ghana, Nana Addo Dankwa Akufo-Addo, says his seven month old government is already fulfilling the promises and commitments made to the Ghanaian people in the run-up to the December 2016 elections, despite the economic mess inherited by his administration.

According to President Akufo-Addo, “when we came into office, we were met with huge debts and no money. It is for this reason that we put in place the appropriate measures to strengthen our monetary system, so the development we promised the people can be met.”

The President noted that the Asempa budget read in Parliament by the Minister for Finance, Ken Ofori-Atta, in March, has ensured that the country’s finances have been placed on a solid footing, and are gaining strength to ensure the fulfillment of his government’s promises.

President Akufo-Addo made this known at a durbar of Chiefs and people at Bibiani, in the Bibiani Anhwiaso Bekwai, on Monday, August 7, 2017, at the commencement of his 3-day tour of the Western Region.

A flagship programme of his government, the Free SHS policy, President Akufo-Addo reiterated, will commence in September 2017, made possible by the sound economic policies his government has put in place.

Touching on the dwindling fortunes of the cocoa sector, President Akufo-Addo noted that the policies and programmes instituted by former President John Agyekum Kufuor ensured that the cocoa production hit 1 million tonnes in 2010/2011.

However, cocoa production has since declined, with the 2015/2016 crop season recording a production of 778,000 metric tonnes.

“My government is going to increase cocoa production again to 1 million tonnes, and move it to 1.5 million tonnes in the course of my mandate. We will also ensure that cocoa farmers gain their pride of place in our society. We will make the cultivation of cocoa a source of gainful employment once again,” he said.

The 1-District-1-Factory policy, President Akufo-Addo noted, will be rolled out in the course of this month, and the construction of the Western Railway lines will also begin shortly, with these two initiatives creating hundreds of thousands of jobs.

President Akufo-Addo also announced, much to the delight of the Chiefs and people of Bibiani, that the Minister for Local Government, Hon. Hajia Alima Mahama, will in September announce the upgrading of Sefwi Anhwiaso Bekwai from a district into a municipality.

President Akufo-Addo added that upon receipt of supporting advice from the Council, he is mandated by the Constitution to appoint a Commission of Inquiry to investigate the need for the creation of the new region.

“From what I have heard Ogyeahorhuor Yaw Gyebi II, the President of the Western Regional House of Chiefs, saying this morning, I am confident that the Western North region will soon be created, because he says you are voting 100% in the referendum for the creation of the new region.

For the first time in the history of the Fourth Republic, new regions will be created and it will be under the presidency of Nana Akufo-Addo that this is going to be done,” he said

President Akufo-Addo, therefore, appealed for the support of the people of Bibiani, adding that “support me fully, so I can work to fulfill the pledges I made to you. Let me reiterate that Ghana is not a poor country. We are a rich nation. With good policies, we are going to bring wealth and prosperity to every part of this country.”