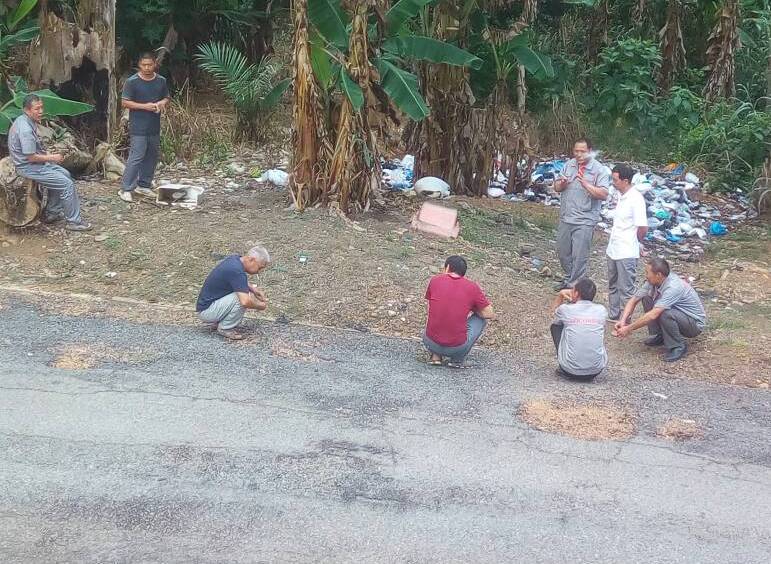 Nine (9) Chinese illegal miners arrested by Operation Vanguard taskforce in the Eastern region shocked several persons who thronged court to observe proceedings on Wednesday when they were seen openly smoking cigarette at the court premises shortly after being granted bail by the Koforidua Circuit Court’ B’.

The Chinese were smoking and laughing among themselves in the company of one “Iron Lady ” believed to have been sent by the Chinese Embassy.

The Chinese and two other Ghanaians were granted bail of Ghc100,000 each with a surety each by the Presiding Court Judge, Her Honour Mercy Adei Kotei. Their Passports were however not confiscated despite plea by the prosecutor, Cyril Boateng Keteku.

Their accused persons are facing preliminary charges of Conspiracy to mine, mining without license, illegal mining and possession of fire arms.

The Operation Vanguard taskforce in collaboration with Forestry Commission staff arrested the nine (9) Chinese and two (2) Ghanaians illegally mining in the KweiKaru Forest Reserve in the New Abirem District of the Eastern region.

The team also retrieved an amount of Ghc66, 000, £100, $340, and ¥2,567. One Mitsubishi Pajaro, a Nissan Hardbody, One steng gun, 104 catridges of AA ammunitions, two boxes of dynamite explosives, 39 rounds of 9mm Long ammunitions, one Jimis, Himderson pistol, one blasting machine, Pump action gun, and 1 automatic Rifle were also confiscated by the taskforce.

The taskforce also set ablaze 58 Chanfai machines and torched mining camps of the illegal miners at Nyafoman stretch of the Kweikaru forest reserve.

The Eastern Regional Manager of the Forestry Commission, Mr. Attah Owusu had earlier explained to starr news that, the illegal miners have degraded over 120 hectares of the forest land, created many trenches posing danger to the forest guards.

He said, the Kweikaru Forest Reserve with a size of 1,200 hectares (12.00km2) is under serious threat because since 2010 about 1,500 people with different nationalities have invaded the forest tracing and mining a gold layer in the forest reserve.

Residents in the Eastern region have raised questions over the botched handling of illegal mining cases involving Chinese nationals. According to them, about 12 illegal miners arrested this year have “disappeared”.

They claim the Police have failed to prosecute them.

But the Eastern Regional Manager of Forestry Commission has assured that the Commission will ensure the suspects are prosecuted.