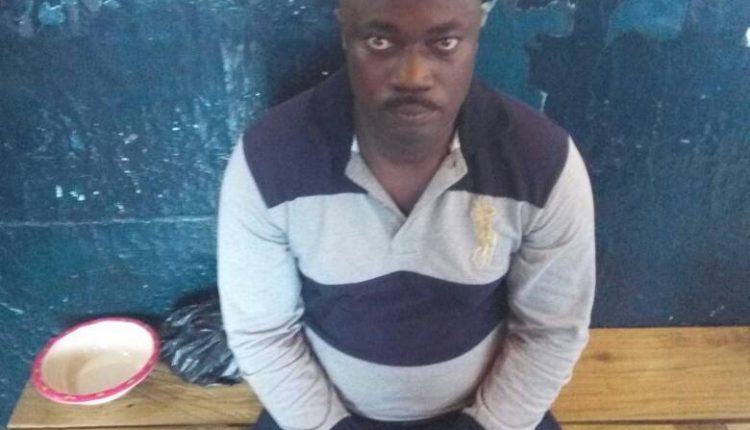 The Eastern Regional Police Command has arrested a fake Military Officer, Anthony Nana Wiafe, for defrauding about 10 unsuspecting persons to the tune of GH¢19, 400 under the pretext of enlisting them into the Ghana Armed Forces.

The Police retrieved some military accoutrements such as  Boots, Caps and Uniforms from the house of the suspect during a search.

Confirming the arrest to Starr News, the Public Relations Officer of the Eastern Regional Police Command, ASP Ebenezer Tetteh, explained that on 2nd October 2017 at 8: 20pm, the victims Alfred Asante and Emelia Odame both residents of Kwesi Nyarko, a community near Nsawam  assisted by Inspector Frederick Asante arrested the suspect having laid surveillance after being suspicious  .

He said the Victims reported to the Police that on 2nd and 15th September 2017, the suspect approached them and introduced himself as a military officer working at the Air Force and collected an amount of GH¢c1,100 and  GH¢600 respectively from them under the pretext of recruiting them into Ghana Army.

However, the suspect failed to honour his promise and went into hiding until 2nd October 2017 when he was arrested from his hideout at Kwesi Nyarko near Nsawam.

According to ASP Ebenezer Tetteh, the suspect is in police custody and a preliminary investigation by the Police revealed that he used similar modus oprandi to hoodwink other people.

His arrest comes on the heels of similar arrest made by the Police last week when a 25-year-old Prince Baah was picked up for impersonating a Police officer at Okorase near Koforidua .

Prince Baah on September 27, 2017 was sentenced by the Koforidua Circuit Court ‘B’ presided over by Mercy Adei Kotei to eight years imprisonment. – Kojo Ansah

Akufo-Addo apologizes to residents of Wa over Military brutalities