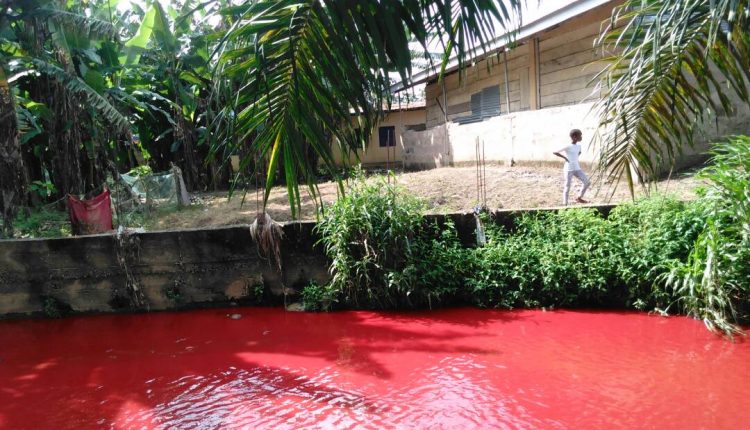 The New Juaben Traditional Council has clashed with the Ghana Pentecostal and Charismatic Council (GPCC) for claiming that the Nsukwao River which turned red Saturday is a sign of anger by God over attempts by the traditional Council and faceless operatives of the National Security to stop a mega crusade dubbed “Koforidua for Christ ” currently ongoing in Koforidua.

Turn out for the crusade has reportedly been low due to the challenges the church faced before being given clearance to hold the crusade.

On Saturday, the Koforidua Nsukwao River turned red for about 3 hours creating panic among residents.

Dr. Lawrence Tetteh, President of Worldwide Miracle Outreach and some Pastors of GPCC visited the scene to pray ascribing miracles to the development.

Speaking to Kasapa News, Bishop Yaw Adu, Founder of House of Prayer Church, a Member of local  GPCC said the incident is a sign of God’s wrath,  however , Prayer has been said for it to be turned into blessings for the people of new Juaben.

However, in furious reaction ,the Krontihene of New Juaben, Barfuor Tutu Boateng Nyantakyi has described the claim by the pastors as deceptive and baseless.

According to him, the incident has nothing to do with miracles but rather a criminal offence which the traditional council wants the Police to arrest the suspect.

Meanwhile, preliminary investigations have revealed that the water was polluted with dye.