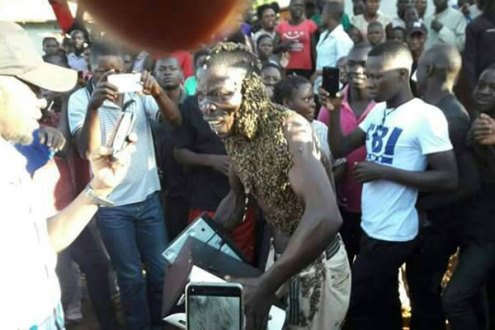 There was drama in Masindi town in Uganda on Monday when a swarm of bees attacked a man suspected to have stolen household items from a resident of Kijura north cell in Masindi District.

Fred Musiime, a resident of Masindi town who witnessed the incident told the Daily Monitor that the bees had covered the man’s head, neck, part of the back and others were in his pockets.

The yet to be identified man who was bare footed and half naked was carrying a black subwoofer and a DVD which he is suspected to have stolen.

“A big group of people followed him as he walked towards Masindi Police station. Others took pictures and shot videos” Musiime said.

He reportedly walked from Kirasa cell in Masindi municipality and moved along the main street and made a stop-over at Masindi police station.

However, police did not come to his rescue forcing him to proceed to Kijura North cell in Masindi town where he is suspected to have stolen the equipment.

Video footages shared by witnesses on social media showed the man wailing as he held the subwoofer in his right hand while covering his head with the left.

According to eyewitnesses, the man who was in the company of Boda Boda cyclists who laughed, hooted and jeered at him went to the resident of a female witch doctor in Kijura ward who poured a liquid on him and the bees vanished.

The Midwestern regional Police spokesperson Mr Julius Hakiza said the incident was not reported to Police but detectives have picked interest in the matter.

“He is suspected to have been bewitched after allegedly stealing some household items,” Mr Hakiza said.