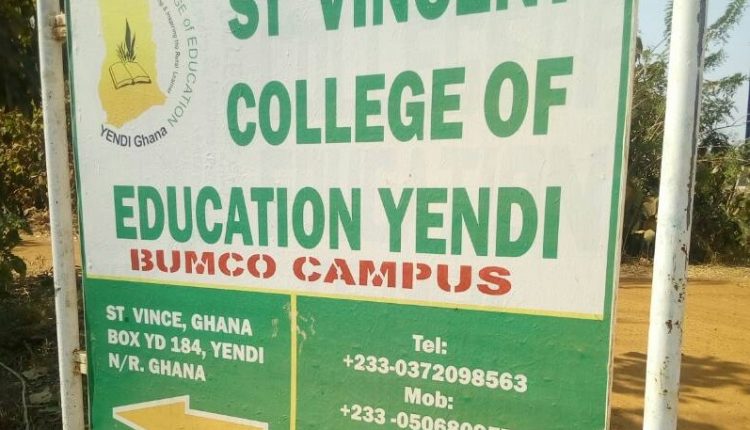 Police on Thursday stormed the Saint Vincent College of Education at Yendi in the Northern region when angry students seized a teachers’ bungalow and attempted to forcibly eject two staff of the school in a growing agitations for payment of allowance.

The police dispersed the students who had  massed  up on the college’s  campus to continue a street protest against school authorities and government who they accuse of jeopardizing their future.

The teacher trainees begun a protest on Tuesday demanding school authorities to disclose whether the college had been absorbed by the state or they were still private students.

They have petitioned the education ministry through the Yendi Municipal Chief Executive asking for government to start paying them a mandatory student allowance since available documents to them show government has fully absorbed the college.

The college Students’ Representative Council (SRC)  President,  Issac Nilmo speaking to Starr News said the two staff were targets because they meddled in students’ affairs and influenced decisions of the school authorities.

He explained that students were about to mount roadblocks and compel the staff to vacate  the bungalow when management of the school called the police, who responded quickly and foiled the confusion.

Police held a meeting with the  authorities and student leaders and advised them to calm the tensions, and left without any arrest, according to Mr. Nilmo.

He however said he could not understand why students of the college were still exempted from receiving allowance from government, adding that they will intensify pressure on management of the school to provide answers and solution.

Nilmo revealed that students will stage a street procession today, Friday to follow up on the petition they presented to the MCE and then follow it up with a total boycott of classes by Monday.

“We are also saying, If the college is a public college then government should as a matter of urgency release funds for the completion of our new campus, because currently where we are, we are about 400 students and we are forced to depend on only three lecture halls to study,” the student  leader said before announcing their next lines of actions.

“Once the petition was sent, we’ve not received any concrete information from the MCE and we planned of doing a follow up today but because of the police, we decided to go tomorrow, but by Monday if we don’t get anything concrete, I’m afraid we have to do the proper thing,” he warned.

Over 40 students of ABUSCO suspended indefinitely over gangsterism

Video: Teacher inflicts cane wounds on students for laughing at him