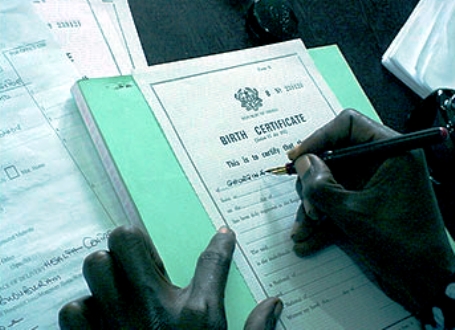 The Births and Deaths Registry has said it does not allow certain prefix and suffixes deemed as titles to be registered as part of names on birth certificates.

In an interview, Mr John Agbeko, Registrar at the Births and Deaths outfit, explained that local names like “Nana, Nii and Togbe” are most used as stool names and title for leaders in the traditional setup.

According to him, parents choose these names (titles) to honour relatives who have played vital roles in their lives and do not want their names to be missing from their family.

Mr Agbeko suggested that such titles that the registry does not accept as part of names should only be used in the house and the community and not add them to name for birth registration.

He said “if we allow ourselves as a nation to give names the way we want because it is us who have got the child and we will want to name the child the way we want, there will come a time that we will have wonderful names in Ghana. So it is just a control measure to make sure that there are moderating factor on us citizens to direct how our naming should go.”

The Registrar pointed out that it is not the case that his outfit is against only the local names (title) because it does not accept the English ones either as that is how their system operates.

“Nobody is against a local name. The only difference is that I have a baby and I want to name this baby by giving a name like for example where I come from, you have Dzibgordi, which is Patience and also using Mabel and you want to make Dzibgordi the first name, by our operations we tell you this cannot occupy the first name but Dzibgordi can be in the middle name to have Mabel Dzibgordi Abgeko,”he explained.

He further explained that “if you still want the Dzibgordi, then you can leave Mabel and we will use Dzibgordi for you as your first name but because we are English-speaking people, if you take Mabel and Dzibgordi together I do not know how it will look on paper if we do Dzibgordi Mabel Abgeko.”

But the registrar said they are not imposing names on people but just upholding measure and suggested that as a nation if Ghanaians prefer these names they can declassify and rectify them to be used.

“We can have names like Togbe without linking it to titles or stools. That is fine but it will degrade reverence that goes with a title name. Children who are not even one will have title name. It will not change anything from anybody or individual. It will take a lot from the society together as a collective as we start calling babies with titles names,” he said.

In an interview, some parents whose children were affected by the measure of the Registry told the Daily Heritage that they did not name their children after anybody but the registry simply rejected names like Nana, Nii, Naa, Nyhira, Dromo, Dzormo, and Junior from names they presented without explaining anything to them.

Mr Kojo Antoh, a parent said “the registry did not register my son’s name as Nyhiraba because according to them, it is not recognised and that it is just a prefix. When we are being advised to accept local names and use them, the registry is rather preventing us from using them.”

Madam Rose Mensah also told the paper that the change of name has affected her document because right from childhood she was using ‘Naa’ as part of her name but when she went in for her birth certificate ‘Naa’ has been taken off and was told to use only the name accepted by the registry.

‘Blacklists on the use of indigenous names‘

The Births and Deaths Registry of Ghana encouraged people to use indigenous names, but is still adamant on the use of those which it says are just titles.

There have been a lot of complaints from people who say that whenever they try to add traditional titles like Nana, Torgbui, Nii, Maame, etc. to the names of their children, the Registry said that it was not permissible by law.

Adults who were using those names had to swear affidavits at the Commissioner of Oaths to have them changed.