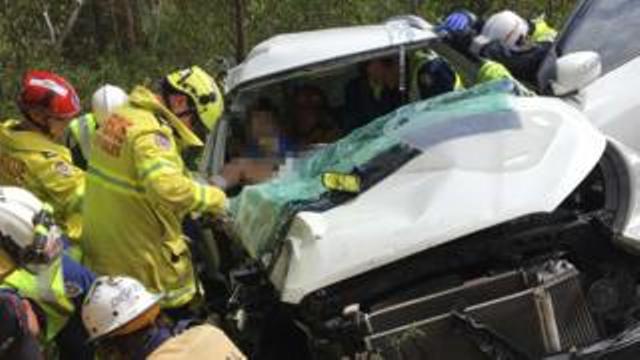 An Australian teenager has been found alive in a car wreck after his father made an intuitive decision to search for him in a helicopter.

Samuel Lethbridge, 17, was trapped for 30 hours after his car left a New South Wales highway on Sunday, police said.

His family had become concerned and alerted police when he failed to arrive at a friend’s house that day.

Tony Lethbridge then decided to hire a helicopter after recalling a local car accident from “about five years ago”.

“Unfortunately that bloke passed away because nobody found him within five days, and I wasn’t going to let that happen [to Samuel],” he told local network Channel Seven.

Mr Lethbridge said he suspected his son was in trouble because his disappearance was out of character.

“So we went and hired the helicopter straight away and found him within 10 minutes,” he said.

Emergency crews took more than an hour to remove the teenager from the car, where he had been trapped under the dashboard.

The teenager was taken to hospital with multiple fractures and remains in a serious condition, authorities said.

“He is very lucky to be alive,” said Inspector Jeff Atkins, from New South Wales Ambulance.

Police said they were investigating the crash.

My son is suffering from bipolar; Pray with us – Duncan-Williams