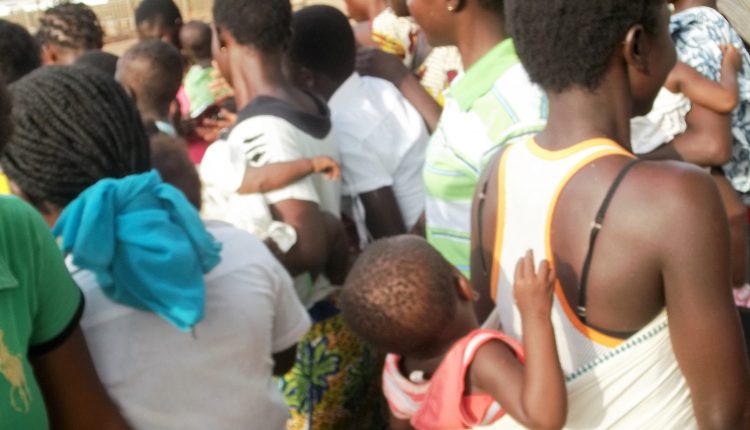 Single teenage mothers in the Upper East region, who find it extremely hard daily to feed out of chronic poverty, are now resorting to intoxicating their babies with akpeteshie, a locally distilled gin, as a coping measure to silence their newborns from wailing when hungry.

Some babies born to such frustrated teen mums are reported to have died in their sleep soon after they were given a tot of akpeteshie sold as cheap as 50 pesewas.

Dorcas Akonga, a single-mother activist who has met with over 600 teenage mothers in the regional capital (Bolgatanga) alone, told Starr News: “One of the girls gave her child akpeteshie she bought at 50 pesewas so that the child could sleep for longer hours to allow her enough time to search for food before the child would wake up. The baby did not wake up. The girl told me she buried the baby herself secretly. And now she has run to Kumasi. There are several areas in the region where there is no house without a single teenage mother.”

Young mothers dispatching innocent babies to early graves with intoxicating liquor is not the only ‘silent horror’ alarmed observers in the region are speaking about. Those teenage mothers themselves are also said to be undergoing their own troubling experiences daily behind society’s back. Poor girls, who need food badly to feed their babies, they said, are also being forced into unprotected sex by well-resourced persons who know themselves too well to be STI-infected before they hand out a paltry amount of money to the defenceless girls.

“Nobody can be as wild as a mother whose child is hungry. At that point, there is nothing like reasoning. And the man, knowing what he’s carrying, would opt for unprotected sex. He wants to spread the disease. The girl is hungry. Her baby is hungry. All she wants is money. It’s happening in offices. It’s an agreement. They say, ‘Use what you have to get what you want’. There are worse things happening,” said Madam Akonga.

One of the “worse things” Dorcas alluded to probably was what the Upper East Regional Director of the Department of Children and member of the region’s child protection network, Georgina Aberese-Ako, also told Starr News. Last year, her department was at 175 schools in five districts in the region to cut down a rapidly growing teenage-mother population through an education tour sponsored by the United Nations Children’s Fund (UNICEF).

During an open forum, a confused rural schoolgirl seriously asked as to whom to obey: the department, who came strongly with warnings against adolescent pregnancy, or her poor mother, who had firmly told her to use her “vagina” to buy “sanitary pads” for herself? The director also gathered, when the department moved to another district during the tour, that another man had used his own 16-year-old daughter as collateral at an akpeteshie bar to defray some drink debts he owed to the bar operator. The school-going girl was indentured to that bar to serve as a waitress for months without pay until the wages she would have taken home had equated to the debts her “unremorseful” father had accumulated.

“Although poverty is a factor, some parents also are not helping matters. Schoolchildren at the upper primary level are now carrying their own babies, everywhere,” she grieved.

“I had no Sanitary Pad before I met him”— Teenage Mother

Starr News interacted with some girls in Bolgatanga who got baited to boys their age or even men old enough to precisely narrate how their fathers’ naming ceremonies were performed decades back.

They were convinced things would get better by committing themselves to newfound relationships that came with some ‘mouthwatering’ prospects. But it turned out worse as their partners denied responsibility with strong swear words and vanished after they became pregnant. Their schooling came to an abrupt halt and their once-bright-looking future hung in tatters and in gloom.

“My parents were poor. I was in Senior High School then. You could imagine a girl going to school without sanitary pad, bathing soap, washing soap and a lot of things that we the girls would need. They were not able to provide all these things. Getting food to eat was a problem. I had nowhere to go. My thought was that going in to pick a man would be of help. Yes, I had what I needed; but the outcome was that I became pregnant.

“He gave me money three times to abort the pregnancy. He said he was not ready to be a father. But I used the first money to feed myself, the second for toiletries and the third one to buy clothing for the baby I was expecting. He rejected me because I refused to abort. And after the pregnancy, I had to go back to square one— what I was going through. There was no soap for bathing the child, nothing to eat, let alone what the child would wear for postnatal care attendance,” Gifty Ayorigo, an old student of the Bawku Senior High School, narrated as she blinked her teary eyes steadfastly in a sad recall.

Regina Akugre told Starr News she was in her second year at the Abilba Number Two Junior School in Bolgatanga when she had to start paying attention to lessons on exclusive breastfeeding.

“My parents were jobless at the time. So, I hardly got any food to eat in the morning before I set off for school. I thought going for a man would help me. But in the end, I got pregnant. I was 17 years. I didn’t even know I was pregnant until my mother noticed some changes in me and asked me the last time I menstruated. I said four months ago.

“Then, she told me I was pregnant. The man responsible for it called me and gave me some medicines. They were about four medicines. He said I should take them to abort the pregnancy. And I said I would not do it because I didn’t know if it was safe for me to abort a pregnancy that was already four months old. He vanished after I gave birth,” she said, twisting her lips remorsefully.

Dorcas Akonga (mentioned earlier) went through similar hardships herself as a single teenage mother many years ago.

Determined to support poor girls trapped in the nightmare of single-motherhood and to prevent more youngsters from tripping into that same slippery fate, she launched a non-governmental organisation, the Dakella Youth Mothers Organisation (DYMO), less than a decade ago with a loan she virtually snatched from her mother.

Through Dakella, which means “Weep No More”, several girls, including Gifty and Regina, have at least completed their senior high school education and have acquired some vocational skills to fend for themselves and their children who are also now in school. The same beneficiaries, led by Dorcas, also do visit basic schools in the region as a team to help curb teenage pregnancies by sharing their experiences with their target groups.

With the disturbing new trend of distressed teenage mothers now putting their hungry babies to involuntary sleep with alcohol and killing them in the process, this is the time an organisation like Dakella is expected to intensify its campaign and support. But it is said to be financially handicapped, with no donor backing. Dorcas says she intends next to bring together all traditional authorities and assembly members among other stakeholders to whip up a communal conscience to the untold toll of single teenage motherhood on society.

“If these children are not well catered for, in the end they would be the people pulling the gun on us. If we choose to ignore the reality today and the babies become armed robbers tomorrow, the authorities who ignored them would be the first to face their guns.

“The SDGs (Sustainable Development Goals) are very loud about education, health and empowerment. What these girls are going through right in front of our eyes are a threat to the attainment of those SGDs twelve years from now. Let’s see what we can do as quickly as we can to empower those girls to save their education, to bring back their lost dreams, to make their future bright again and to halt the havoc being done to the lives and the fragile brains of their hungry babies with akpeteshie,” she stressed.

The durbar Dorcas intends to organise should gladden the heart of the Paramount Chief of Bongo, Naba Baba Salifu Atamale Lemyaruum, who once made a tearful statement no one has forgotten yet, that “Children are giving birth to children in my community”. It should inspire hopes at Anafobiisi, where the chief, Naba Anyanebah Akolgo Saabo II, and his elders once considered a ban on use of mobile phones to drive back a wave of teenage pregnancies.

And it also may pacify a cherubic-faced elderly man who, as Starr News was taking leave of some single teenage mothers after an interaction inside the ever-congested main lorry station in Bolgatanga on the ‘silent horror’, suggested with a tone of frustration from where he sat: “Men who can boldly write exams in secret should also not deny their own grades in public, good or bad, when the results are finally out after nine months. Please, tell them.” – Edward Adeti

UE/R: Flood victims to wait a day or two longer for relief item